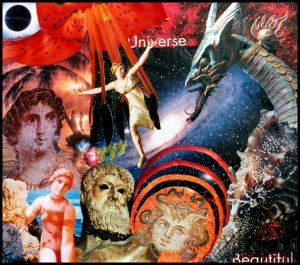 This story board collage depicts the myth of Andromeda. Her story encompasses several constellations in the northern sky: Andromeda, Cassiopeia, Cepheus, Perseus and Cetus. Known as The Chained Lady, we see this celestial princess emerging from her enchainment (or enchantment?) behind the stamens of a tiger lily, as she steps out from the bright core of the Andromeda galaxy. Her arms stretch across the heavens as she touches both universe and Earth. She is looking at the sea monster (Cetus), a dragon of immense creative power. His dragon breath creates the galaxy. Below the dragon is a star-studded luminescent sea horse. The male sea horse carries and nurtures the young in his pouch, tied to the moonlit rhythm of the seas. Cepheus, Andromeda’s father, is said to be king of Ethiopia. This story is set on the sea caoast. Another image of the maiden Andromeda is seen in the lower left, in a decorated marble sculpture of Venus from Pompeii. Behind her is a picture of the bay near Paphos in Cyprus, where Venus-Aphrodite was said to be born from the sea. Andromeda was chained to a rock by the sea as a sacrifice to the sea serpent.

A statue of Poseidon found in the sea represents Perseus who beheaded Medusa with his deeply reflective vision. He carries her serpent-crowned head on the shining shield of the Sun, reverberating with power. Medusa is sometimes imagined as a Sun goddess, radiating life-giving power through the rays of her streaming “hair” of solar wind. From the severed neck of Medusa emerged Pegasus, the winged horse, representing the freedom of imagination. From Perseus’ own head three angels of inspiration come forth as well as the colored clouds of the Trifid nebula, birth place of stars. He is inspired with vision in his dark gaze that sees into the cosmic Void. Perhaps he is riding Pegasus homeward bound through the skies when he spies Andromeda chained to the rock with monster approaching. He swoops down to save her.

On the “western” side of the picture we see Queen Cassiopeia watching the whole drama, under the canopy of her palm tree. Images of the constellation sometimes picture her thus. In the Greek version of the story, it is her vanity that sets the whole drama into motion. Sea-side lovers under the splendor of the setting, and eclipsing, Sun show the denouement of the story–the union of Perseus and Andromeda.