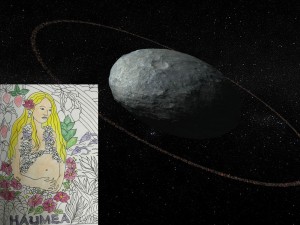 Image: HAUMEA, Hawaiian Goddess of Childbirth, is a dwarf planet with an orbit about 35 years longer than Pluto. Both planets having elliptical orbits, Haumea periodically comes closer to us than Pluto. See more below.Photo by the Instituto de Astroffsica de Andalucia, Spain, with partially colored Haumea page from this author’s Planetary Gods & Goddesses Coloring Book.

A welcome Sabian Symbol for this 27 Libra New Moon:
“A Spot of Light in Clear Skies, an Aeroplane Sails Calmly”

“Dwelling above the normal stress of existence,” is Dane Rudhyar’s interpretation. “Superior mental vision. Calm, objective observation; quiet inner strength.” Don’t we need that these days?! Whatever it takes to create some space of calm in your life is, perhaps, the leading edge of consciousness to maintain integrity. The chaos on the outside is driving us inward, even more so now that Jupiter is in Scorpio, the sign of inner depths, the first in a series of significant planetary sign changes coming our way. Before we plunge into those waters, however, Uranus claims our immediate attention.

This most dynamic New Moon is charged to high octaves by Uranus, the Awakener. Can you feel the snapping and zapping of high-charged electricity into our planetary system, including our personal mental/emotional/physical vehicles? This is a high dose of rapid clearing winds and sudden switches, much like the unprecedented storms that have changed landscapes and lives in the blink of an eye. Many personal stories are like private storms, with new developments requiring fairly immediate response and decisions to be made. Keen vigilance is called for, as we cannot take things for granted. The old “normal” is being blown or washed away. Let’s make the most of any situation you face to forward a positive agenda, even in the face of tragedy. This is life. This is the way it is. We need each other and we need community.

Uranus promotes the implications of the New Moon Sabian Symbol given above. Step back, don’t take things personally. It is one of those times that are bigger than the individual, though each of our responses contributes to the outcome, for better or worse. Within a few months, Uranus is going to change signs for the first time in 7 years (into earthy Taurus!), signaling an obvious shift in our collective attention. Uranus is doing the most with the time it has left in Aries to move things along: out with the old to open the way for the new and fresh, unprecedented and unpredictable—not a comfortable energy, but very exciting and energizing if we rise to it.

With Jupiter now amplifying Scorpio intensity, staying centered and calm may take some work, especially in view of what is going on in the world. We have the opportunity now, and for the coming twelve months, to focus this intensity into positive, life-affirming channels. We can’t slack off here. On this New Moon, Mercury and Jupiter join together, indicating a potential piece of alchemy in terms of how we are thinking about things. It is SO important to entrain our thinking with positive and empowering concepts, visions, and news.

This is a huge current of energy that we are diving into, carried off or carried in. Like my friend Mary says in the aftermath of the Caribbean Cat.5 hurricanes: “We need to find the next ‘normal’ and make it work.” Whether we were physically present for one of the recent and ongoing disasters or experiencing the wild winds, fires, earthquakes and floods emotionally and mentally, many of us are feeling the impetus to recreate our lives from some deep impulse or necessity. “Dis-aster” means against the stars. We need to align with the cosmic agenda.Scorpio is the sign of the Phoenix that arises from the ashes.

Let’s dig up something really good to come of all this. Can we engage revitalizing energy rather than get pulled down into the muck? Can we process issues and let them go instead of stirring up more mud? We are each responsible for our own energy field. And lots of help is available, as we are seeing individuals and groups step up as first responders, cutting through the red tape of bureaucracy. Let’s do it.

“There always comes to my mind, like the stars in the sky, an echo of the authentic cultures in art that have been created in past times. They should unite with the dreams of the culture today.” —Marc Chagall

As we go deeper into the expanse of outer -and inner- space, we encounter archetypal dimensions and tap into energies that can aid us. Chagall would be happy with the new discoveries in the far reaches of the Kuiper Belt, where Pluto reigns as the first discovered and still the largest of an increasing number of planetoids. Most are being named for indigenous creator gods. I love that our celestial pantheon is expanding beyond the Greco-Roman to encompass the globe. Deities from most continents are included, though we need African ones to add their wisdom. And who knows of any from Antarctica?

One of the new solar system planetoids is Haumea, the Hawaiian Goddess of Childbirth. Discovered in 2003, egg-shaped Haumea is one of five dwarf planets, and the only one named for a goddess. Now at 24 Libra, her powerful, creative goddess energy is present in this New Moon cycle. Themes of pregnancy and birth feel appropriate. In the midst of writing this New Moon piece, I was hearing conversations about birth while out doing errands. The chaos in the world feels like the throes of giving birth. Haumea gave birth to everything on Earth, perhaps she is the Earth. How do you relate to this creative energy? What is wanting to be birthed through you?

Throughout this Moon cycle she may compel us to offer more of ourselves to life, more of what we are capable of. In Libra, we can do this through collaboration—that’s what pregnancy takes, after all! Haumea offers a generative capacity, creativity in response to what is needed and what can grow. She also honors the “post-partum” time of self-renewal, a pause, taking care of herself so that she can continue to bring forth. She not only about birth, but about rebirth.

Just this year, a ring was discovered to be circling Haumea, a rare thing for such a small object. Puzzling to astrophysicists, this opens a delightful state of wonder and mystery. What keeps the ring there is a question with no current answer, as it spins slowly around. Mythically, a goddess with a halo is divinely archetypal.

Haumea also has two moons, named for two of her daughters, adding grace notes to Haumea’s meaning. Hi’iaka is the goddess of the hula dance, a beautifully expressive storytelling art. Namaka is a sea spirit, mer-maid, bringing forth life from the ocean. Her other daughter (maybe a moon not yet discovered) is volcanic Pele. Her telluric powers bring forth new worlds. Can we come together with whatever capacity we have to do so on our level?