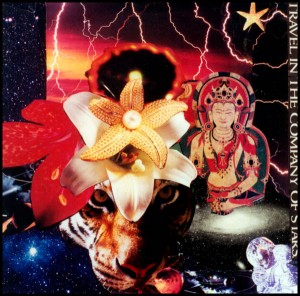 In the lower corner, Urania, the muse of astronomy, contemplates an astrolabe, a classic astronomical instrument, with Earth at her shoulder. In some distant celestial region, Buddha also contemplates, sitting on the lotus pad of the Andromeda galaxy. Thunderbolts of enlightenment charge the skies with lightning, a still mysterious phenomenon of the upper atmosphere. The action-charged impulse in the heavens moves down through the powerful tiger, here representing the Buddhist concept of “skillful means,” spirit-informed effective action in the world. The tiger seems to “speak” a red star and Mars, the assertive red planet. The tiger is crowned by three layers of lily–red, white and gold. The golden “lily” is a jeweled sea star. The “pearl beyond price” sits in its center—a reference to the Bible and to the psycho-spiritual therapy of A.H. Almaas. A supernova explodes above, like a halo. Heaven and earth are joined in “the company of stars.”