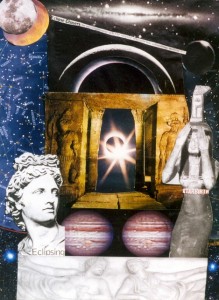 This total eclipse highlights the polarity of two opposite signs, ARIES and LIBRA. There are also other planets in those two signs that amplify the impact of our experience of Self and Relationship.

During a total lunar eclipse, the light of the Moon is “turned off” and turned back on again— a dramatic statement about closing a door and opening a new one. Visible in Australia, New Zealand and across all of the Americas, these regions may experience the mundane ripple effects of this eclipse most powerfully. If you live in those areas, go out and watch this lunar eclipse, if you dare to be loony and mystified. An eclipse is a significant karmic turning point, a shift of destiny that ripples through our system for some time to come, at least six months, but more likely a year. There is a reverse total eclipse on October 8, which will be a good time to look back to what is going on now.

ARIES is a highly individualistic sign, at its best capable of pristine integrity to the Self. Aries is the first out the door, off the starting block, blazing a new trail, full of initiative, sparkling with energy. It can also be a sign that’s “all about me.” We’ll see both fully exposed in the full light of this Full Moon. Will you stay with your clarity or be pulled off-center by others?

Also in Aries under this Full Moon is an exact conjunction of Change Agent URANUS and MERCURY, the Messenger, suggesting surprising developments during this blacked-out Moon, or in its aftermath. This highly electrical combination will certainly be charged up and bring unexpected news. Maybe it already has had a preview effect in your life…? There is A LOT to talk about, debate, discuss, considering all angles and new approaches. This is a major change-up moment. Don’t you know A LOT of people making big changes? As an astrologer I am hearing this A LOT, and experiencing it myself! Never a dull moment, but do take time to center yourself. This eclipse is essentially about relationship to your Higher Self.

LIBRA is a sign that seeks relationship, likes to share life, to cooperate in partnership and is interested in what other people think. For the sake of harmony, Libra may accommodate the partner, allowing the other person to lead the way and make the decisions. Relationships improve when each person stands centered in Self and relate from that clarity. As Shakespeare wrote:

This above all: to thine own self be true,
And it must follow, as the night the day,
Thou canst not then be false to any man.

On the other hand, Aries needs more of a patient listening ear and willingness to communicate and cooperate. On the heels of this eclipse, we experience a heightened polarity of these two qualities, leading to a clarified level of understanding ourselves and others. Some relationships are due for change, including on the global level. If you are in a relationship, do something together that you’ve never done before. If you are on your own, head out to do something interesting and see whom you meet. Surprising, serendipitous circumstances bring people together.

Also in Libra, MARS is still retrograde. We take another and yet another look at what we are doing, at: What do I want? What do you want? What do we want? — and what are we going to do about it? Decisions may be delayed, and may depend to some extent on other people, new information, a sense of surety. This eclipse will instigate interesting conversations, new ideas, possibilities, points of new, likely to change our minds. We want to be feeling really excited about moving forward. Mars finally does turn direct the third week in May. So we have some time. Stay alert.

Themes of the minor planet CERES are fully embedded in this eclipse, as she is exactly conjunct the eclipsed Moon. Here is what I wrote for the April-May issue of “Vermont Woman,” a newspaper of women’s news in Vermont (it’s online if you are interested), where Ceres stands atop the golden dome of the State House:

CERES SAYS
When the small astronomical body named CERES was upgraded from asteroid to dwarf planet status in 2006, this represented a collective change in relation to matters in her domain. Most essentially, Ceres is the Goddess of grain, of the cereals named for her. She feeds us, body and soul. She is concerned with the Great Round of life and death, the cycle of the seasons. She oversees natural resources and ecological balance, fostering the common good… Now in the sign of Libra, Ceres turns her attention to justice, dialogue, negotiation and relationship. She is asking us to consider what is fair for “all our relations,” in the Native American meaning that includes all forms of life, as we make decisions to be implemented in the next few months.

Ceres particularly points to food issues, and has grave concerns about GMOs, pesticides and bees, among other such current issues. In Libra, let’s see what legal decisions come up about this and other matters in her realm.

The cosmic feminine has been haloed in the last few weeks, due to the discovery of double crystalline rings around Chariklo, a tiny planetary-cometoid with compassion, intuitive, healing influence.
The current combination of Venus, Neptune and Chiron in spiritualizing Pisces further enhances our sensitivity to the in-flow of the divine feminine. Within this flow, there has been an underlying presentiment that we are moving toward a critical turning point, that something must change; it can’t go on like it has been.

Deep historical wounds may surface or be addressed in some way, as the need for justice is served or at least demanded. We are asked by the Universe to forgive ourselves and others, to let hurts of the past wash away. Another related thread has to do with the waters of the world and the need for purifying them. This is as much about the waters in our bodies as it is about pollution of the waterways. Health is dependent on healthy fluids in our systems—our blood, sweat and tears—and so many more. In body, mind and spirit, we are increasingly sensitive to all the energies we are exposed to—what we breathe, eat and drink, as well as the aesthetics of our surroundings. We are as hungry for beauty as for fresh foods. The sacred geometries of Nature instruct us in redesigning our way of living on Earth. Let’s drink a toast to that with a clink of glasses of pure water.

This eclipse opens directly into the fifth of seven exact square-offs of the Uranus and Pluto, the pattern that is engineering this period of evolutionary and revolutionary transformations and pushing the evolutionary wheel of human destiny so intensely. Circle these remarkable dates on your calendar: April 20-21. Not only are Uranus and Pluto doing their sweep of renewal, but Mars and Jupiter are lined up so close in on the action, that they make one of the most powerful planetary square dances we’ve had in this millennium so far.

This is historic stuff and we are living it. These two slow moving planets joined together in the 1960s. This period is the next dynamic activation, bringing the revolution of The Sixties to another manifest level. Uranus and Pluto are two of the outer planets with long orbital cycles that reflect the trends of the time and changes in the collective consciousness. When they interact in a challenging way, such as we are now experiencing, there is a major disruptive and transformational impact on a global scale.

In addition to the polarity of Aries and Libra highlighted by this eclipse, JUPITER and PLUTO in opposition complete a grand cross pattern, pushing and pulling from all four corners of the sky. This gives that sensation of A LOT going on. A slow deep paradigm shift of our belief systems is leading to transformation on cultural-economic-political levels. What do you believe about what is going on? Entertain alternative points of view, just to open your mind. Let’s write a really good story. This eclipse and the upcoming couple of months are a big turning point in the unfolding drama. This is a humdinger of a wake-up call. Action is called for, unequivocally.

Old systems we live under are being deconstructed, as we design new ways of organizing ourselves in harmony with natural patterns of Earth energy. We see it happening in so many ways. Interesting news continues to come to light and major, though often secret, negotiations continue to press the march of change under the leadership of shrewd players who hold good cards and, hopefully, good hearts. The general level of frustration continues to be high and fuels violence by various groups. This is nothing new, but the activity escalates in these next couple of weeks. Things may look messy and dirty, but in the end it’s a cosmic and karmic clean up.

After such a potent total eclipse, we each proceed to clean up our act, sweep out some cobwebs and take a new look at what’s working and what’s not. We stick to the job of letting go and moving on, implementing steps that propel us in the right direction. Deal with what is in front of you and let seeming limitations nudge you along the straight and narrow—and inevitability— path toward the best outcome. Seek out and consider workable possibilities however the circumstances are shaping up. It’s up to us to take care of our business.

Bringing our attention down home and person, what does this mean to you and me? Galactic Astrologer Philip Sedgwick offers some advice in his Sky Scraping! newsletter (see PhilipSedgwick.com):

What can you do individually?

For Mars retrograde in Libra:
*Apply diplomatic solutions in life that do not encroach upon or compromise your bottom line, minimum standards for a satisfactory, contented life.
* Play nicely in the sandbox.
* Remember, all things are always connected, and once interacting, remain interacting.

For Jupiter in Cancer:
* Foster your own needs first. It’s like the pre-flight warning on airplanes. If you go unconscious by putting on another person’s oxygen mask before your own, you become a liability, not an asset. Stay conscious, clear and committed to the highest doctrines.
* Ensure your basic life necessities are in order before taking on massive goals.
* Approach all goal-oriented relationships with the attitude that you are building an extended family.

For Uranus in Aries:
* While it’s fine to assert your individuality and counter-culturedness, ensure you do not become one of those cantankerous, rebels without a cause or a clue or consciousness to back up off the wall contentions.
* Work for the whole of the planet in everything you do, regardless of how mundane. Be a grand and contributing citizen of Earth.
* Offer progressive solutions or maintain radio silence. Squeaky wheels without solutions are no fun.

For Pluto in Capricorn:
* Assess your bottom line in all things.
* Locate the “I have enough” Goldilocks zone for your financial status.
* Apply soulful intention to each and every action taken.