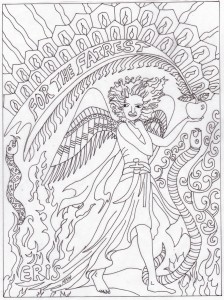 is a mythic troublemaker, she who threw a golden apple into a party on Olympus. It had a tag that read, “For the Fairest,” starting a contest between the goddesses that no god was going to touch. They tapped an upright young man named Paris.  Juno promised him a kingdom and Athena great wisdom, but, inevitably, Paris awarded the apple to Aphrodite, who offered to bring him the most beautiful woman in the world, Helen of Troy. This famous “Judgment of Paris” led to the Trojan War.
Eris is out and about these days in the forefront of any revolution, stirring up polarized discord and feisty arguments about everything under the Sun. Have you encountered her? The 2005 discovery of this dwarf planet caused a hubbub among astronomers and the “demotion” of Pluto. This body was almost named Xena, for the television warrior queen, so she has a gritty, fight-for-the-right side as well. Whose side is that? Make it yours.
[Image from my PLANETARY GODS & GODDESSES COLORING BOOK—look in the Astro-Mythology section]