Haumea is one of the new planetoids in the ‘far out’ zone of the solar system. The Kuiper Belt is an exciting arena of icy planetoids, with Pluto on its close edge. Astronomers have been identifying more and more of these tiny new bodies orbiting the Sun, some with moons or ‘companion objects’. Generally, they are called Kuiper Belt Objects (KBOs) and TransNeptunian Objects (TNOs), with sub-categories including ‘dwarf planets.’ Haumea is one.

Those close to Pluto, with orbital rhythms in synch with Neptune, were given names of underworld deities— Etruscan Orcus, Greek Rhadamanthus and Ixion. Further out, a new mythic category beyond the Greco-Roman pantheon was tapped: a global roster of indigenous creator gods and goddesses from around the world. This new realm of astromythology is significant and exciting, mirroring the widening horizons of our collective consciousness. These creator deities open (or refresh) archetypal dimensions of consciousness, as if emerging in response to an urgent invitation from Earth herself and, likely, the prayers of traditional peoples who know their primordial power. I intuit that these new celestial neighbors operate from a higher dimension, perhaps a quantum level, engaging implications of the increasing alignment of science and spirituality. 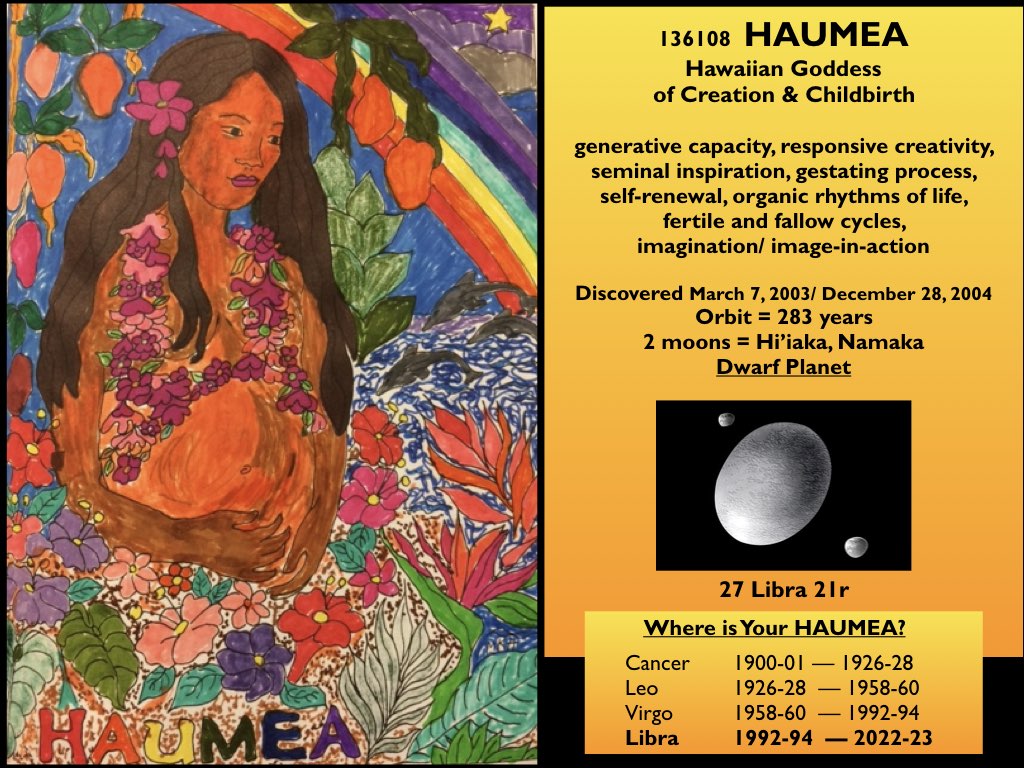 Haumea, astronomical object #136108, was photographed on March 7, 2003, and identified on December 28, 2004 by Mike Brown and Chad Trujillo of Gemini Observatory in Hawai’i and David Rabinowitz of Yale. So close to Christmas they nicknamed it ‘Santa.’ Brown’s wife was pregnant (!), which delayed the announcement. A Spanish team had also examined the 2003 data and announced their discovery, suggesting the name of chthonic Iberian goddess, Ataecina. This name did not fit into the new category. Rabinowitz’s suggestion of Haumea won the day. Nevertheless, Haumea carries a sub-current of the underworld life/ death realm.

The JPL Small-Body Database Browser (www.ssd.jpl.nasa.gov) is a treasure-trove of data and dates for KBOs, TNOs and asteroids. From this site:
“Haumea is the goddess of childbirth and fertility in Hawaiian mythology. Her many children sprang from different parts of her body. She takes many different forms and has experienced many different rebirths. As the goddess of the earth, she represents the element of stone.”

Astronomical Haumea is a dense egg-shaped rock with an icy surface, rotating end over end every four hours—quite exceptional. Her two ice moons are named for two of her daughters. Again from the Database: “Haumea I, discovered 2005 Jan.26, is named Hi’iaka, who was born from the mouth of Haumea and carried by her sister Pele in egg form from their distant home to Hawaii. Hi’iaka danced the first Hula on the shores of Puna and is the patron goddess of the island of Hawaii and of hula dancers. Haumea II, discovered 2005 Nov.7, is named Namaka, for a water spirit in Hawaiian mythology. Namaka was born from the body of Haumea and is the sister of Pele. When Pele sends her burning lava into the sea, Namaka cools the lava to become new land.”

Haumea gives birth to every being— mineral, flora, fauna, human (and other?) Her daughters, her moons, reflect different aspects of Haumea’s essence. Hi’iaka moves in the rhythms of Earth, telling the stories of the land and sea. Namaka moves in rhythms of ocean tides and currents, guiding sea creatures and sea-faring people. Her powerful waves dowse Pele’s fiery lava in a cloud of steam, hardening it. Note that volcanic Pele is also a daughter of Haumea, birthing land by pouring forth mineral-rich magma to fertilize and expand the Earth from the inside out. Pele’s creative/destructive duality demonstrates Haumea’s underworld theme.

Haumea has a “magic wand,” the Makalei stick that summons the fish in the sea to come and feed the people, bringing needed sustenance.  Such need may be what stimulates her procreativity, yet it may also be impulsed by the sheer joy and ecstasy of generating life from inside herself.  Once she gives birth, she takes fallow time to renew herself. This is a recognized phase of post-partum experience, but a less acknowledged part of the creative process: the potential to go very deep inside oneself to tap into an original impulse, arising from non-rational agencies of heart, inspiration, imagination and desire.

“You imagine what you desire; you will what you imagine; and at last you create what you will…. In one word, to conceive.”        —George Bernard Shaw, Back to Methuselah

Gestation and birthing involve an inherent sense of responsibility to nurture the seed growing in your body. A holistic awareness attends to the spiritual/ mental/emotional dimensions of any being or experience that is gestated and brought into the world. A key is to engage the creative potentialities available in our increasingly quantum world. In the flow of any creative process, a particular energy arises that influences the outcome. This is the basic physics of an interconnected universe, where everything, micro and macro, is in relationship in the underlying field.

A downside of Haumea is a tendency to generate a plethora of ideas or inspirations, too many seeds to gestate at once. This can lead to a kind of creative miscarriage, an inability to give the necessary care and attention to carry through into manifestation. This is another responsibility that come carries with such intense generative capacity: choosing which seeds to nurture.

Haumea’s orbit of 283 years is a few decades longer than that of Pluto. Pluto caught up with Haumea in late 1954 into August 1955 at 25-26 Leo remaining in a 5-degree orb for 5-6 years before and after, in Leo and in Virgo. Natives of these years have intense capacity for transformative re-creation, with a profound underlying dimension of the underworld theme of destruction leading to rebirth.

In the transition years of 1958-1960, combining Leo-Virgo symbology on this cusp, natives are engulfed in the cosmic mysteries of the Sphinx and the Virgin giving birth. I have a sense that Haumea is especially tuned in to earth signs. Check the accompanying table to find your Haumea sign.

Haumea is now at the far end of Libra, intimately involved in the cardinal sign dynamics throughout 2020— squaring the Capricorn power trio of Jupiter/ Saturn/ Pluto and opposing the Eris/ Black Moon Lilith/ Mars retrograde complex in the second half of the year. Her wild creative stirrings may be a saving grace, carrying her Hawaiian Aloha spirit, a greeting which means love and peace. This placement in Libra, especially squaring the Capricorn planets, calls our attention to that responsibility to carefully choose which seeds to nurture in relation to the wider field of connectivity. The underlying intention for manifestation most truly arises from a desire for ‘right relationship’ with ‘all our relations.’

This birthing goddess was conjunct the New Moon on October 16-17, 2020, which spawned this article. We have barely two more years to tap her potential to bring forth new relational harmony on higher levels that supersede arguments and dissention. Through Libran collaboration we can together spark exciting, original concepts and fresh innovative ideas into manifestation.

ALOHA NUI LOA!
(in Hawai’ian = Very Great Love and Peace to You!)