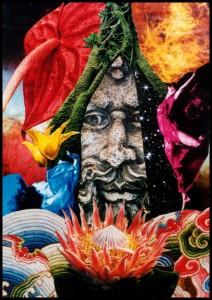 Prajapati, the creator god of Hindu myth half-veiled by night, peers out from within the moss-lined trunk of an ancient tree, like the pagan Green God. He sees his daughter Dawn rising, and falls in love with her. The overt sexuality of the passion flower and antherium, the wild fiery power of the Sun and distant nebulae, and images of the dancer Jean Bresciani (Director of the Isadora Duncan International Institute) evoke the flavor of this erotic creation story. A Japanese tapestry provides the water and waves, the sea of life, with flying bats that represent rebirth. In the end, the other gods join together to send an arrow–the stars of Orion’s belt– to pierce Prajapati before he can act on his incestuous desire.