Lilith Speaks At The U.N. 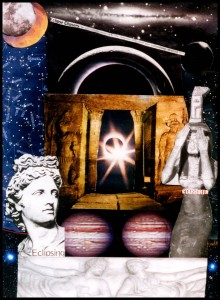 I was not in very good shape as I headed to the Big Apple. I had a migraine coming on so strong I felt nauseous. I had been on the go for a week, continuing now on will power and desire. I wanted to do this. I was in minor panic; performing in NYC was daunting. Mary, who had invited me to be in the performance, had never seen my work. We were going on sheer trust. I found the downtown studio on First Ave. and went up its labyrinth. The musicians were rehearsing. When I heard Mary’s song, “Storm Wind,” I knew why I was there.

This special presentation at the United Nations was offered by the Humanitas Institute, an organization for cultural therapeutics, promoting creative expression as a personal healing tool that leads to healing of the collective. The presentation at the U.N. was a series of pieces to demonstrate this work. I was to perform a monologue of the dark goddess Lilith. Lilith speaks from deep feminine attunement to the mysteries, the life-death-rebirth cycle of the Great Round. The dark goddess lives in or descends to the realm of the underworld, the unconscious; the source of her knowledge and power is hidden, subtle and sacred. Like a flute player serenading a cobra, she pulls up the energy from deep within the Earth, and we are pulled down into our shadow selves to meet her. Just inside the threshold stands She Who Knows the Way. We must trust her, for we have no choice.

After showing my piece to the small rehearsal group, Mary and her dance partner worked with me. It was great to get feedback from these trained actors. Seeing how ill I was, they encouraged me to be with my body. My stomach felt hollow, sick and sore. I spoke Lilith’s words from this empty dark hole. Moving slowly, I put less dramatic force behind my voice and gesture. I began to allow the still power of my body and the words to speak for themselves. Lilith was teaching me–and healing me. At the end of an hour of rehearsal, I felt fine for the first time in two days.

The next day at the U.N. was opening day of General Assembly. Because of recent threats, security was very tight. It took us over an hour to get our group in. We had no time to rehearse on the stage. The audience was small, but the delegates from Bosnia and Azerbaijan were there. Mary and John’s dance, a powerful piece about a woman’s inner terrorist, was dedicated to the women of Bosnia. And Lilith called for peace in the Middle East.

It was autumn equinox, a day of the balance of light and dark, signaling an opportunity for healing polarized relationships–between spirit and body, male and female, country and country, and humanity with the life-giving power of Gaia-Earth.

“Please, call me back,” pleaded Lilith.