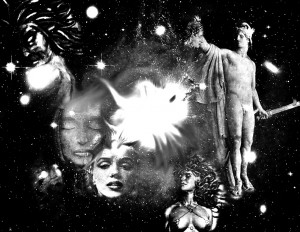 This Full Moon at 26 Taurus is aligned with ALGOL, one of the most powerful stars in the sky. Algol, “The Demon” Star in the constellation of Perseus, marks the Eye of Medusa, the mythic snaky-haired gorgon whose glance turned one to stone. Perseus is pictured holding her severed head that he has just cut off.

“The Gorgon’s head, a ghastly sight,
Deformed and dreadful, and a sign of woe.” —from Homer’s Iliad

It’s as if Medusa’ Eye is fully open on this Full Moon and we are looking right into it. In his heroic quest to cut off Medusa’s head, Perseus used his shield as a mirror to look at her indirectly. Such reflection can help deflect the intensity of situations and give us much needed perspective. Under the light of this Full Moon, we are reflecting deeply and standing in front of difficult issues or potential turning points in our lives.

As we know from the last New Moon Total Eclipse and even in last few days, we are at another turning point moment in the process of transformation, on both personal and global levels. Much has been revealed, in both supportive and harsh tones, giving us essential information we can use to move forward in a healthy way. Remember to take care of yourself and loved ones during this intense process. Though this is no time to slack off, you deserve some downtime for R&R. This is what Void of Course Moons are for, with one starting right after the Full Moon and lasting almost nine hours.

The Void of Course Moon is a useful pause to know about. It is the time in the Moon’s passage through a sign after it makes its last exact interaction with a planet and before it goes into the next sign. The duration of the Void can be shorter or longer, depending on current planetary patterns. Things don’t easily gel during this time, which is best used to consolidate, contemplate, rest and regroup. With clear intention, one can harness the energies. When the Moon is Void, it is free from specific planetary appointments. With no set agenda, time becomes more spacious. In this case, the Full Moon energy holds at a heightened light. We stand staring deeply into the Eye of Medusa, bravely bearing the intensity of the revelation of the moment, even if it something we don’t want to look at. If we can sustain this awesome, even sacred Full Moon moment, something new awakens in us that was previously unknown. Medusa is so scary because she represents the power of the unknown. Do we fear the darkness more than we desire the light?

To amplify themes of this Medusa Full Moon, I share below some material and references from my book, Living Lilith: Four Dimensions of the Cosmic Feminine. Algol was called Lilith by the Hebrews, another powerful, often demonized, female image. Let’s consider how these themes are playing out in our world and, most importantly, in our own lives.

There is a great deal of astrological history behind Algol. In The Fixed Stars and Constellations in Astrology, Vivian Robson called Algol “the most evil star in the heavens,” a rather extreme statement. What is deemed “most evil” may be an important key to opening hidden, deeper levels of consciousness, as the study of powerful dark goddesses indicates. Feminist ears perk up when powerful women are demonized. In Brady’s Book of Fixed Stars, modern star interpreter Bernadette Brady helps us re-vision the meaning of Algol, as the face of the feminine most feared for her raw passion and power. “She is female kundalini energy… the power of the feminine or the potential power of Mother Nature, not to be called evil for being strong.” Algol carries the collective rage for the suppression and repression of this power. Brady cites Capulus, the right hand of Perseus that wields the sword, as the equivalent star for male rage.

Kalli Halvorsen of HerStar has called Algol the star of female passion and intensity. As the Eye of Medusa, Algol gives witness to the violation and abuse of feminine power and sexuality, she suggests, which gives rise to a profound rage. This rage can be self-protective, yet it often needs some kind of expression so that it does not turn in on itself from paralysis of repressed emotions, a cancerous emotional situation. In Epheta, Vivian Bennerson, “Mother B,” a wise woman who worked with Medusa, wrote, “Let us become angry enough to care about ourselves… let self-love develop as it ought once we admit and realize that this power is within our grasp.”

In her Fixed Star Workbook, Diana K. Rosenberg reported on Algol transits connected to catastrophes and violence, yet also finds a spiritual side—serious, patient, talkative, and not bigoted. In the arts, it can show ghastliness and beauty at the same time, in politics, brutality along with high-mindedness. She gives the example of Picasso’s “Guernica,” a passionate anti-war response to fascist atrocities in the Spanish Civil War. Picasso had a strong Algol signature.

Anthropologist and art historian David Napier, author of Masks, Transformation and Paradox, has researched gorgon-like masks across the world, linking Medusa and the Balinese Barong masks, a traditional artistic expression of wild beasts. Such bestial lion-like Gorgon faces are the symbolic image of intense sensory experience, Napier believed, of immediate experience that is outside rational interpretation or understanding. Such masks express powers that tap into the fearsome irrationality of nature, those that stop us in our tracks. Beyond the mind, this Gorgon knowledge is instinctive and kinesthetic, purely biological experience. Such ferocious creatures and faces may be protector spirits, guarding the sanctity of a temple or a home, to ward off evil.

The powerful, penetrating and paralyzing Eye of Medusa sees right through you and perceives “with an objectivity like that of nature itself and our dreams, boring into the soul to find the naked truth, to see reality beneath all its myriad forms and the illusions and defenses it displays,” as described by Sylvia Perera in her rich volume, Descent to the Goddess. The eye is the window to the soul. The mirror is another. The word mirror derives from the Latin miror, mirare, “to wonder at, to be astonished.” The Latin word for mirror is speculum, which gives us such words as speculate, (which originally meant to divinate with a crystal ball or mirror) and spectacle, as well as telescope. The mirror of the universe reflects the depths of our souls, immensely spacious like the dark energy theorized by current astrophysics. The mirror of life reflects the status of our inner world. We are in great transition on both the inner and outer levels.
In the mystery of Algol, this star of female empowerment, dwells the power of recognizing the essential beauty beyond the terrifying darkness of the unknown. The “awe-full” beauty of Medusa carries so much of our own untapped power that we dare not look her in the face. And if we do, will we be terrified of what we see, of our own potential and the responsibility to use it? There is a Hindu word, “bhey,” that means a sense of awe bordering on fear, a fear of offending or dishonoring, particularly God. To see deeply into the dark side of life, its wildness, irrationality and chaos, can be profoundly transformational and freeing if one can endure the intensity of such an encounter that strips the ego bare, exposes the naked soul. Algol can bring us to this edge.

Algol is a double star. The two stars eclipse every two and a half days, creating fluxuations of strong desire of purpose that fuels our intent, followed by a lull, fallow moments when we may feel empty and lose heart. In this dangerous or blissful desireless moment, we face that void or emptiness of Medusa’s Eye. Are we stopped by it, is a resistance formed? Can we handle both desire and desirelessness? Buddha reminds us that attachment to our desires creates bondage to the world. Can we see through our desires and let go? Can we let go of superficial desires to commit to the strongest, truest desires? Ultimately the Eye of Medusa faces us with the inevitability and paralysis of our own death. How do we see through death?

In front of the deep dark endless space of modern cosmology, we may feel insignificance, terror and despair. We are confronted with the immense question of free will, a choice to willingly participate consciously — or not. This is the existential dilemma Perseus encountered in front of the primordial Eye of Medusa. ln his book, A Sense of the Cosmos: The Encounter of Modern Science and Ancient Truth, philosopher Jacob Needleman expresses the profound nature of this critical, sacred moment of reflection and self-questioning, “for there is nothing to guarantee that we will be able to remain long enough or deeply enough in front of the unknown.” In such a moment of stillness, we are petrified in a state of internal transformation, of potential awakening. Needleman identifies the core question as an emotional one, facing us with the unknown and stripping away our illusions. He says the question to be answered is, “Do I fear the darkness more than I love the awakening?”

This is a question humanity as a whole faces in the throes of a paradigm shift such as we are experiencing now. We each have our personal moments of confronting fears of the unknown, the void, the fathomless gaze of Medusa.

NOTE: My new book, COSMIC DAILY WEATHER 2014, will be out in the next week or so. It was quite an interesting process of intuitive research to write Cosmic News-type interpretations on a monthly and daily basis for this new year so full of potential. I will be making a special announcement soon!

ASTRO-SPECIALS
YOUR PERSONAL 2014 OVERVIEW—As I came to realize while writing Cosmic Daily Weather 2014, the upcoming New Year is going to be quite an intense one. This special personal overview offers helpful insights and timing you can use in planning ahead and throughout the year. Book yours by Winter Solstice, the 21st. One hour, $125. This makes a good holiday gift also!

ASTRO-SPECIAL is on for Sagittarians until the 21st, then for Capricorns. This is an astrological overview of your year, using the special window of your birthday chart along with usual planetary cycles. One hour, $120, that’s 20% off. This special fee also applies to a birthday gift for the Sun sign, a Gift of the Stars!