Full Moon in Leo reflecting Sun in Aquarius highlights our sovereign individual relationship to the larger social context. Stepping back into an Aquarian perspective, how are you witnessing yourself in the greater whole amidst the trends of the time? This Full Moon squaring the Destiny Line formed by the Moon’s Nodes @27 Taurus/Scorpio, indicates a powerful transformational turning point. 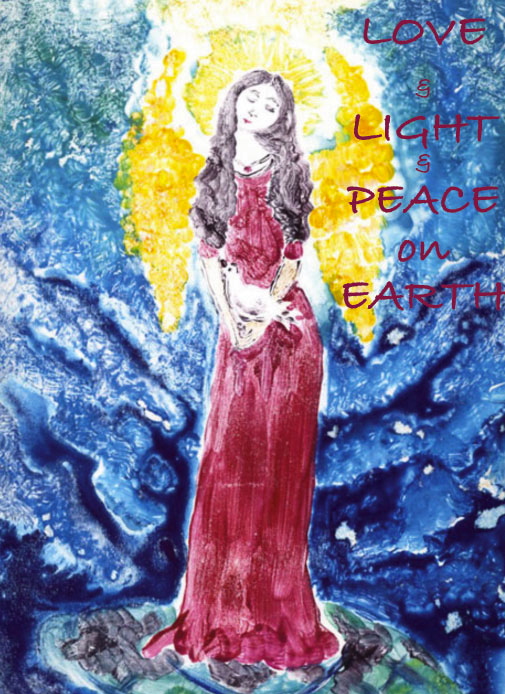 Earth Mother Peace Dove, monotype by author, circa 1997, from workshop with artist Janet Cook-Rutnik on St. John, Virgin Islands. See some of her island-inspired works here

Full Moon in Leo reflecting Sun in Aquarius highlights our sovereign individual relationship to the larger social context. Stepping back into an Aquarian perspective, how are you witnessing yourself in the greater whole amidst the trends of the time? This Full Moon squaring the Destiny Line formed by the Moon’s Nodes @27 Taurus/Scorpio, indicates a powerful transformational turning point.

This Full Moon finds us continuing to process the recent double retrogrades of both Mercury, the Messenger of the Gods, and Venus, Goddess of Love and Beauty. Both have a way to go to complete their retrograde circles. Mercury returns to its January 14 retrograde starting point at 10 Aquarius on February 24, with a refreshed take on ‘things’ and a new orientation on what is happening. February 24 might even see Mercury do a double flip, as it runs into a square with Uranus with more surprising, unexpected information to take into account.

Venus returns to its December 19, 2021 Pluto-charged retrograde starting point on March 2, accompanied by a capable, reliable Mars, exalted in Capricorn. A triple conjunction of Venus, Mars and Pluto is quite an extraordinary, well-seasoned grand finale to this Venusian reevaluation of our circumstances. By then, be ready for well-considered action. What is your action plan? As this Full Moon wanes, have these two weeks to get a good, workable outline sketched out. Proceed with care and a strong sense of responsibility.

Even now, on this Full Moon, Venus is consorting with Mars—in an exact conjunction today at Sabian Symbol 17 Capricorn:
“A Young Woman Surreptitiously Bathing in the Nude.”
[If you are in a place where you can sunbathe or swim in your birthday suit, good for you! Many of us are in sub-zero nights, with rather frigid rays of a sunny Leo Moon washing the night awake.]

Back to Nature! Venus and Mars are having an extended rendezvous, earthing with bare feet on the Capricorn ground, reveling in the sensation of life. They are in a supportive, cooperative alignment with Uranus in Taurus, earth sign to earth sign, with the same agenda for practical common sense in daily living. Forget pie-in-the-sky wishful thinking, avoidance, abstract ideas, and immature blaming. Strip down to basic essentials. Exult in the rich textures of life.

After the Venus-imposed New Year task to personally reconsider what is truly and deeply meaningful in our lives, this Full Moon is a turning point. As Venus and Mars, the mythic lovers, link arms and stroll together purposefully toward a destined appointment with Pluto as February turns to March, we are likely to feel an increasing compulsion to let go, to be free, to strip off restraints and shackles that hold us back from our simple, basic enjoyment of life. To uncover ourselves from our inherent connection to Nature.

In her classic book on The Sabian Symbols as an Oracle, Lynda Hill accompanies this 17th degree with a quote from Claude Debussy:
“How much has to be explored and discarded
before reaching the naked flesh of feeling.”

Mars conjunct Venus is an inherently emotional pair, sandwiching Earth on either side. Representing the masculine and feminine aspects of our human nature, we are offered a time to embrace these two sides of consciousness into our lived experience. Capricorn is a sign of experience, of maturity, of seasoned capability. How is it that you are in-corporating, in-bodying, incarnating this emotional togetherness? We can each step up and take responsibility for our experience and choices in many ways. Venus is an excellent ally in infusing our lives with satisfaction, appreciation for all we are given, for the exquisite, ordinary beauty of Nature. Essentially Love is the key. Venus, especially when retrograde, invites us more deeply into our hearts to tap our emotional intelligence and to love ourselves in our true essence as an expression of the Divine.

Holding that key of Love, or the Peace Dove, we step back once more into a higher mind Aquarian witnessing of our experience. We see things more clearly, from a broader perspective. We feel differently about life, about other people and all living beings we share this Earth with.

Comments on the Astrology of the U.S.A.
This Full Moon in late Leo recalls the August 2017 Total Solar Eclipse that covered the U.S.A. from coast to coast. What was going on with you back then? Where and who were you? How much has changed, personally and collectively? This is a good time to take stock. This Full Moon activates the Moon in U.S. chart @27Aquarius. The Sun always visits that Moon on this date each year, but not always on a Full Moon! Moon opposite Moon draws out the public sentiment.

This month Pluto is returning to its position in the July 4, 1776 national chart, for the first time, a 248-year cycle. This is a Pluto, death and rebirth moment that has been ramping up and extends through 2024. The first moment is on February 22, at the end of an interesting numerological shift window between 2.2.2022 with five #2s to 2.22.2022, with six #2s. Whatever that means, it sounds and feels significant. I heard somewhere that 22 is a master number. Sounds good— and relevant.

A parallel transit is Neptune opposing the U.S. Neptune @22 Virgo, now in progress and continuing through 2022, including the very special Jupiter/Neptune conjunction on April 12. It is hard to tell what is going on when Neptune is so active. The veil of illusion has not yet been pulled back all the way.

Two outer planet activations at the same time are potent and full of consciousness shift! These two outer planet transits don’t always happen at the same time. Pluto has a highly elliptical orbit, so that it travels through signs at different speeds. Farthest from the Sun, Pluto stays in Taurus for 30 years (last in 1853-1884). In Scorpio, at perihelion, Pluto moves quickly through in under 12 years (1984-1995). From 1979-1999, Pluto was closer to us than Neptune (did you know that?). Through the 20th century, Pluto has been coming closer to the Earth/Sun and moving increasingly quickly through the signs. Life has indeed been transforming really rapidly in our lifetimes! While Pluto is heading back out and moving more slowly through the signs in this 21st century, we have great respect for its capacity for evolutionary necessity.

Something of special collective relevance is happening in the U.S. chart, therefore in the U.S.A, which has global repercussions. This is a moment of destiny for a young nation that has yet to live up to its potential and is, perhaps, going through a dark night of the national soul. Every citizen contributes to the outcome. Prayers and well wishes for the best vision to be manifest from everyone around the world helps the light shine brighter.

This is a particularly potent moment.
This Full Moon, squared by the Nodes of the Moon,
the collective Line of Destiny,
plays out as it wanes over the next two weeks,
and through the course of 2022.
Take your place, find your role,
be your best Self in the greater world
as your heart calls you from the inside out.