Uranus infuses this Solar Eclipse with electrical volatility, high-charged awakening and Earth energy empowerments that affect our bodies and consciousness. Even a partial solar eclipse has a huge impact that shifts our experience of reality. Track your physical experience and let Nature hug your body close to ground the en-lightening impact, just like a lightning rod. Expect a roller coaster ride for the whole month of this New Moon cycle, with a exclamation point on the May 16 Total Lunar Eclipse. On a glorious note, Venus joins Jupiter and Neptune in Pisces to add a wave of Grace, Joy and Beauty. Rather than engage in the potential discordance, let’s underline this uplifting Piscean celestial music as the primary tonality, and make a ‘joyful noise unto the Lord all ye lands’! 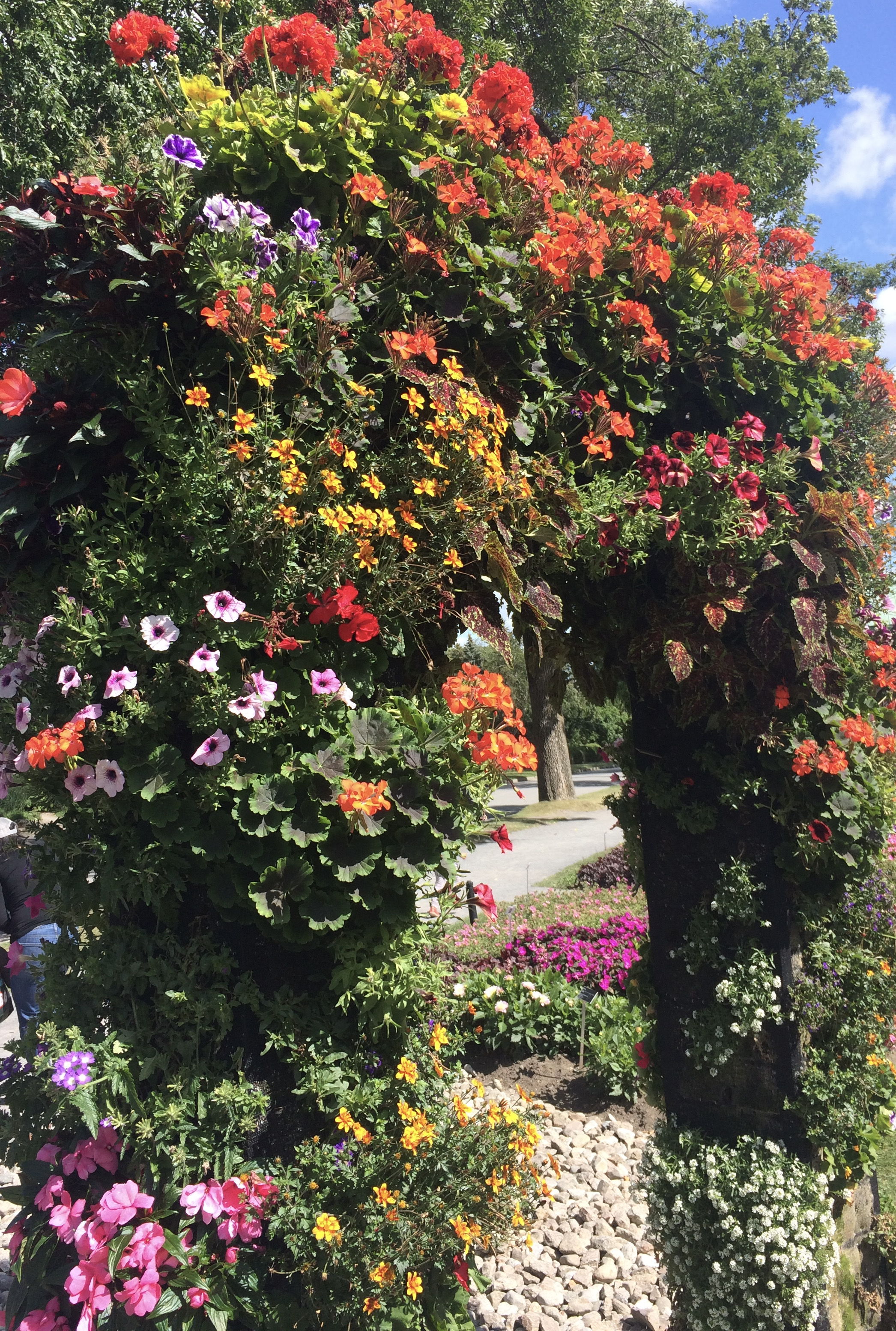 Flowered archway at Jardins Botanique de Montreal, 2017, photo by author. This photo was taken days after the Total Solar Eclipse of August 21, 2017. You are now invited to walk through this flowery Taurus Solar Eclipse gateway. This partial eclipse offers an invitation into a changing world, heading toward a Total Lunar eclipse.

On the April 1 New Moon, Uranus was conjunct Mercury, giving us heads up information that has paved the way a bit— if you were listening— into this New Moon cycle driven by the awakening, revolutionary, higher mind influence of Uranus. Mercury has just gone into Gemini, its own sign, and will turn retrograde on May 10 before the Full Moon on May 15-16, a Total Lunar Eclipse!

Mercury will revisit Taurus during the retrograde, weaving a connection between earthy Taurus and airy Gemini. Think dandelions! With a nourishing root deep in the soil, the happy yellow flower turns to seeds that fly up on the breeze to scatter hither and thither.

At 11 degree Taurus, the New Moon Sabian symbol is:
A Woman Sprinkling Long Rows of Flowers
No need to plant dandelions, as they plant themselves, but how about some vegetables along with those flowers? Perhaps the Earth has some new bounty it wants to offer us in these changing times. As we work with Earth, she rewards us.

Pluto turns retrograde
Astrologer Richard Idemon described the impact of a planet that is turning around like holding one’s hand over a candle flame. We feel more keenly the heat of its light. Pluto, the key impactful planet on the last Full Moon, punctuates its intensity on this eclipse and continues to burrow down into the 29th degree of Capricorn. Its retrograde period extends all the way into October.

29 Capricorn— A Woman Reading Tea Leaves
Is this the same woman who is sprinkling her flowers? Perhaps! Likely! The Divine Feminine is fully engaged in this Solar Eclipse. We can see the signs everywhere if we know how to read them.

Venus joins Jupiter/ Neptune in Pisces
Even as we continue to feel the subtle reverberations of the Jupiter/ Neptune conjunction, Venus joins them! She brings the conjunction to a whole new level. Jupiter and Neptune both rule Pisces, and Venus is exalted in this sign, which means it is her highest placement, full of compassion, grace and love for all life. What an extra special gift to grace our world, our dreams and our subtle energy bodies. It is as if the dream body overlaps with our aetheric, mental, emotional and even physical bodies to wake up to the Big Dream we share from the divine realms. There is the other possibility of getting caught up in nightmares, as these times are still dark and confusing. If we look with altered perception, from the higher mind as suggested by Uranus, we can see the emerging light. This eclipse season offers another portal to shift our view point and, thus, our experience. Do you believe in divine influence, in synchronicity and magic moments’? in the Good, the True, the Beautiful?

Venus and Jupiter at 28 Pisces send an open invitation, with this Sabian symbol that augments the New Moon theme:
A Fertile Garden Under the Full Moon.
How glorious this resonance of imagery with the New Moon degree!
Lynda Hill writes

“The ‘tidal’ effect of the ‘Full Moon’ on the emotional ‘waters’ in this moment are raising the emotions high and creating a strong sense of satisfaction, this under the blessing of the ‘Moon’s’ strong feminine energy. There’s a sense that one has all that’s needed…right now is the time to enjoy the energy.”
[from her The Sabian Symbols as an Oracle]

For that fertile garden, we first need to prepare the ground and seed it. Many in the northern hemisphere are doing those tasks now. In the garden of your life, what kind of seeds are you planting— with each thought, feeling and action? Did you try the suggestion given in my last newsletter to see what you believe? This is creating from the inside out, rather than reacting from the outside in. With the dissolving (Neptune) of belief systems (Jupiter) that no longer resonate with your heart (Venus), we can perceive anew and find the ways and means to experience the ‘New Earth’ that many are imagining and seeding. Some sprouts are already shooting up, with much more to come as we head into the Total Solar Eclipse on May 15-16.

My friend Mary is passing around bumper stickers that say,
“Dream It. Manifest It.”

That’s the golden ticket to this eclipse. Let go of what holds you back.
Raise your voice in joyful noise.

For an additional, gentle nudge, Mars is also in Pisces making a strong, supportive aspect to this New Moon in Taurus.

Taurus rules the throat chakra, expressing the breath of the divine through singing, even inviting the whole body to be an instrument of that voice through dance and movement as well. The voice of the Divine Feminine calls us through this eclipse. What is she saying to you? These words caught my attention:

“My intent is to shake yesterday’s unquestioned crystalized structures,
loosen that which hoards energy,
and invite a more empowered life into every moment’s free flow.”

—from Anna, Grandmother of Jesus: A Message of Wisdom and Love by Claire Heartsong. I just finished reading this soul-stirring revisioning by Anna, mother of Mary, of the esoteric Essene background of her grandson’s journey into Christ consciousness. Essentially, that is the journey we are all on, into consciousness of the Divine in ourselves, and living life as an awakening process that then takes us through death of the small self into resurrection and ascension. It feels as if our whole world is going through something like this, as we continue through this dark passage of letting go of old ways of being and opening to a new vision that guides our steps forward.

Here we are in eclipse season with cosmic gateways that open new portals,
as the bridge to the past burns behind us.
Find your path and give it your all.