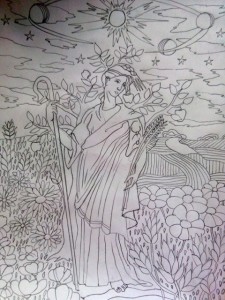 Eclipses are always special. A cosmic gong sounds and a celestial door opens with an invitation to move through or be left behind. This one is especially special, sifting down from the Great Dreaming ever so subtly altering the wavelengths. Some changes will be obvious, are already in play. You know. This power play moment ups the ante for faith, divine grace, forgiveness, compassion, healing.

An eclipse is marked by the Nodes of the Moon, the destiny line of our current collective karma. We are being called to witness the meltdown of reality as we have known it, to listen with our feet on the ground, deeply rooting in to the core of Gaea-Earth, dancing to its rhythm, its heartbeat, attuned to the mystical unstruck music.

This eclipse is about realizing our deep need, a survival necessity no less, to embrace the Earth in its cosmic unity, universal divinity. Lately I am enjoying OnBeing.org web radio with Krista Tippett, and recently listened to her interview with Joanna Macy, called “A Wild Love for the World.” Macy read a number of Rilke’s poems that she has translated from the German. It was my kind of radio bliss-out. Rilke deeply engages the mystical with earthy metaphors, making the divine feel so tangible. Yes, it is. We can know this through the temple of our bodies. In another interview, with Yo-Yo Ma, he was talking about the earthy texture of music. The body responds to the sensuality of musical nuances. Music, as well as poetry, is a Piscean language, in which such textured nuances can be embedded and evoked.

The strong planetary pattern that marks 2016 through August leads us to this potential. We’re being knocked about a bit by pushes and pulls from many directions, as if buffeted by the strong winds of change. One needs to bend a bit, to bend the knees, feeling the earth’s gravity, pushing deeper into its core, our core. We need the earthiness of Virgo to bring forth the potential of this eclipse. This is a South Node eclipse, with the New Moon conjunct that point which we call the Dragon Tail. The resolution is the North Node, the Dragon Head, the place across the dark threshold of the Moon’s shadow across the Sun.

We need the Virgo Earth resonance, to feel our bodies moving in the rhythms of Nature, for a wellspring of energy, service and hope. This eclipse is a gushing geyserof feelings to cleanse and purify. Note whatever or whoever pollutes your psychic waters and purge, i.e., turn off the news, stay away from toxic people and give yourself enough private time to devote to your spiritual wellbeing. It’s as if we are between waking and sleeping. Can we bring the Dream alive?

Anything is possible. Direct your energy toward exciting, inspiring possibilities. Don’t even think about going the other way. Catch any down-turning, anxiety-ridden thoughts. Not useful, not real. Saturn in Sagittarius is confronting us with limiting belief systems, whether our own or another person’s. Consider the question of Truth, your deeply intuited sense of truth.

You may realize you are not who you think you are as a constrained personality in the dense Earth plane, conditioned by all kinds of factors beyond your control. Perhaps that is one version of reality, the one promoted by most people, but there are so many more. Let your imagination jog out beyond the familiar neighborhood into the wild reaches of the celestial fields, a constantly expanding field of perception. Apply this imagination to your circumstances. Entertain possibilities. What if….? This is a prime opportunity to rewrite the story of your life. One new idea or perception can have life-altering ripple effects under an eclipse such as this one.

The New Moon is influenced by Mercury, Neptune and especially Ceres and Chiron, all in Pisces. Animal stories will be powerful around this eclipse, especially water creatures. Personally I’m off to the sea to live my mermaid self, so grateful there are healthy waters to swim in. Ceres shows us the extraordinary beauty and abundance of Nature that feeds our souls as well as our bodies. We may not be sure where we are heading. The road curves ahead and we’ll need to turn the wheel to follow the yellow brick road and it unfolds.

A sailing metaphor may be more appropriate for Pisces. Let’s imagine we’re on a boat—the winds are shifting, the tide is turning, underwater currents are strengthening. Center yourself and go with the flow. Feel your sea legs and keep you hand on the rudder as you go with the flow. During last month’s surfing competition in honor of one of their greatest in Hawaii, there were some monster waves, possibly record-breaking, that were thrilling for the world’s surfers that were invited to be there. You are the champion of your life. Ride the waves to the best of your ability.

You folks born with Chiron in Pisces may especially feel this eclipse. If you are born 1961-1968, some in ’69, and especially eclipse babies of February-March and August of 1961, I have an astro-special for all of you folks. You may feel the need. See below.

Some folks have been purchasing the MP3, “Born in the Sixites” from my audio area  my website lately, indicating a timeliness. It needs an update, which I will upload within this new Moon cycle. There will be more, such as “Understanding Teenagers Using Astrology,” from a talk I’ve given over the years.

Venus, in Aquarius for a few more days, gives us air under our wings, as the dolphins comes up for air. Aquarius is a sign of friendship, the sign of the dawning of the Age: “Come on, people, now smile on your brother [and sister], everybody get together and love one another right now.” This morning I was delighted to hear some news from Galactic Astrologer Philip Sedgwick who keeps up with the expanding solar system. Just a week or so ago, astronomers finally christened a new object discovered in 2012. It’s a small planetoid now named PRAAMZIUS, for the highest creator god of Lithuania who brings peace and friendship to the world. Just what we need! I love him already and can hardly wait to find out more.

New gods and goddesses are arising from around the world to contribute to our increasing global awareness and expanding consciousness. There is a range of underworld gods, a la Pluto (who, we are finding, has a heart!). There is another band of creator gods from various cultures that offer to help us give birth to a new Vision of our world. It’s been fascinating to invite these mythic figures into my awareness doing research for the coloring book.

Wisdom is arising from everywhere. While looking for something or other on the web the other night, an unexpected title caught my attention—”Womb at the Center of the Universe,” an inspiring youtube video with Larry Mercurieff, elder from the remote Aleutian Islands, sharing the wisdom of his people about the creative source and the capacity of women, honored and protected by men, to birth new life:
https://www.youtube.com/watch?v=en4TKmldjrM   and https://www.youtube.com/watch?v=EDt1Umh6_R4

Astro-Special for BIRTHDAY MONTH ASTRO SPECIAL—PISCES, it’s time for your birthday overview. We use the special window of your birthday chart along with current planetary cycles. One hour, $120. This special fee also applies to a birthday gift. Give a Gift of the Stars! I have special e-cards you can use. Message me or email me at kellhunter@earthlink.net.

Astro-Special for 1961-1969 Chiron in Pisces people—This eclipse is particularly strong in nudging you across a bridge into new territory, bringing up issues that are in the way of getting there. Don’t get stuck on the bridge! Insights are in your cosmic blueprint. 1 hour, $116, until next New Moon. OR 3-session special for $296.