“and they made a great Music before him. In this Music the World was begun; for Iluvatar made visible the song…. And many among them became enamored of its beauty… and entered into the World at the beginning of Time; and it was their task to achieve it, and by their labours to fulfill the vision which they had seen… Then they put on the raiment of Earth and descended into it, and dwelt therein.”
— The Silmarillion, J.R.R.Tolkien, edited by Christopher Tolkien 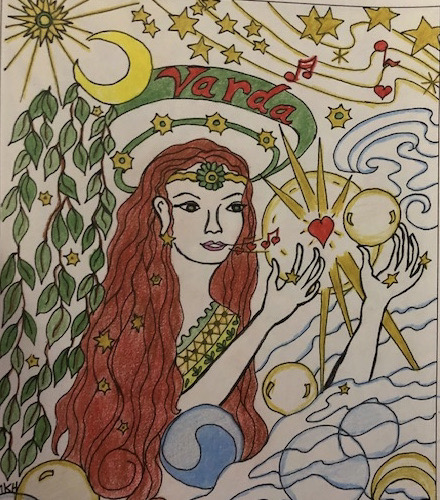 In the year 2003, several Kuiper Belt Objects were discovered. Two were named for mythic figures from J.R.R.Tolkien’s pre-history of Middle Earth. The astronomical tradition gives first dibs to the discoverer to suggest a name fitting the appropriate mythic category— in this case, indigenous creator deities. How delightful that Tolkien’s characters were included in this category! At least two astronomers must be Tolkien fans.

The Lord of the Rings is one of the most popular books if the last century, epic high fantasy that resonates to many with a ring of truth—apart from all the other rings in the story! His posthumous The Silmarillion, edited by his son, is ‘a collection of mythopoetic stories,’ as Wikipedia describes it. Here we find Tolkien’s creation story, how the world came into being from the mind of the Great Spirit, Iluvatar, as in the opening quote. Two of the archangelic choir circling the ‘throne of God,’ were Varda and Manwe, which now have Kuiper Belt representation. Varda was discovered in June, 2003 and Manwe, two months later.

174567   Varda, Star Lady of the Elves
[I give the astronomical I.D. number for use in numerology and to insert into the ‘extended chart selections’ option on the astro.com website to find their positions in any chart.] 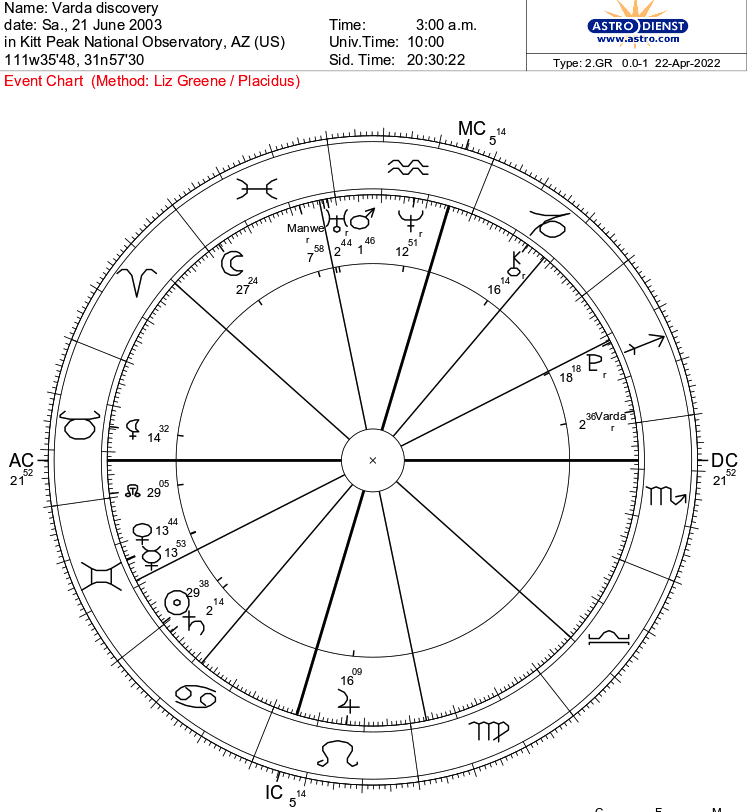 On NASA’s Jet Propulsion Laboratory’s Small Body Data Base , you can look up any asteroid or KBO for astronomical data and discovery information. Varda is described thus:

“In J.R.R. Tolkien’s mythology, Varda is the queen of the stars, the star-kindler. She is the deity who, prior to the birth of the first humans, created the stars and constellations. She also set the vessels of the Sun and Moon upon their appointed courses above the girdle of the Earth.”

Varda was one of the original 14 archangelic beings, called the Valar, who came into the world. “Too great is her beauty to be declared in the words of Men or Elves; for the light of Iluvatar lives still in her face. In light is her power and her joy…Of all the Great Ones who dwell in this world the Elves hold Varda most in reverence and love. Elbereth they name her, and they call upon her name out of the shadows of Middle-earth, and uplift it in song at the rising of the stars” (from The Silmarillion). Varda was also known as Tintalle, the Star Kindler, and Elentari, Queen of Stars.

Varda took centerstage in my attention when she streamed into our Earth plane riding through the total eclipse on December 14, 2020, conjunct that eclipse at 23+ Sagittarius. On my Mercury, she stimulated my mythic imagination into further research and appreciation of her star story. I tuned into primordial memories of the Elven world. How about you? Do you have anything at 23-24 Sagittarius?

Were any of you feeling those ancient worlds calling?

As do the Elves, we astrologers, too, can deeply appreciate Varda for lighting up the stars. We know how the language of the stars brings light into our own lives and those with whom we speak. Now that she has brought her radiant light through the December 2020 eclipse, she moves into alignment with the Galactic Center at 26-27 Sagittarius in 2023-24, gathering light from the Heart of the Milky Way. She shifts into Capricorn in 2026, participating in the parade of sign changing outer planets. Neptune in Pisces has been moving into an activating square with Varda, exact in June of this year and through Varda’s alignment with the Galactic Center and the sign changes of both. Neptune transitions into Aries in 2025-26. All this augurs a new start, perhaps a new world, as we tap deep roots of our ancient heritage and hear the original songs of life.

KBOs are slow-moving, most with orbits longer than Pluto’s 248 years. Varda’s orbit is 313 years.

385446 Manwe, The Blessed One
Manwe  was discovered on August 25, 2003 by M. W. Buie at the Cerro Tololo Inter-American Observatory in northern Chile. 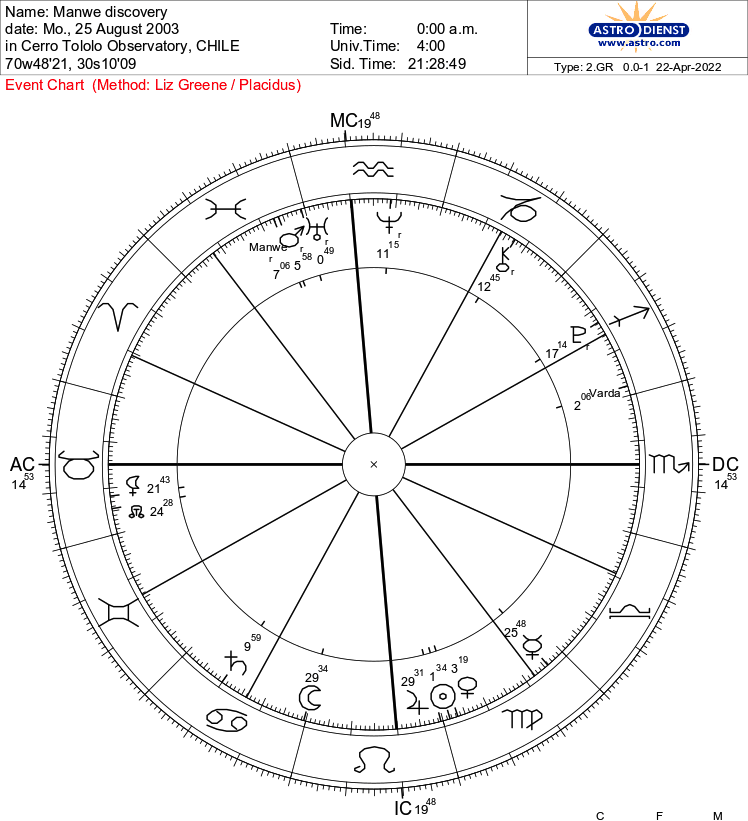 Its companion object is named Thorondor, who ruled over eagles and later became Gandalf. Manwe is named for the chief of the Valar, the 14 archangels who came from the throne of Iluvatar to enter the world, and to create it. His mind is of the highest Divine Intelligence and most closely tuned to the original divine vision. By his name ‘Sulimo,’ he is known as “the Breath of the World,” Lord of air, winds and birds. From the JPL site:
“In J.R.R. Tolkien’s mythology, Manwë is foremost among the deities who rule the world. Manwë takes special responsibility for the air and winds. He resides in the Undying Lands across the western ocean from Middle Earth. For intelligence of events in Middle Earth, Manwë relies on the kingdom of eagles led by Thorondor.”

With an orbit of 289 years, Manwe is in a 4:7 orbital resonance with Neptune; Manwe orbits the Sun 4 times for every 7 orbits of Neptune’s 165 years. This planetary resonance is true to his pure spiritual attunement and compassionate nature.  Looking ahead a few short years, Neptune will catch up with Manwe at 8-10 Aries in 2029. Mark your calendar.

Manwe’s shadowy enemy was his brother Melkor, another of the original 14 archangels. This powerful, unrepentant ‘fallen angel’ fiercely desired the power to create, which belongs only to the Original One, Iluvatar. Instead he embodied the force of evil and undermined the works of the other Valar (archangels), destroying the world time after time. Melkor became Morgoth, the Dark Lord in The Lord of the Rings. Always the light returns, with Varda and Manwe joining with the other Valar. This is one of those times. Varda and Manwe are coming closer to the Sun in their elliptical orbits, with shortening transits through the signs.

Since last year, 2021, Manwe has been ‘pinging’ the potent Aries point, signifying a new cycle, a turning point of divine intent:
* late May to early August, 2021, in tandem with Jupiter’s first foray into Pisces;
* shortly following March Equinox into October of this year, 2022, clarifying the divine intent;
* on June 21 Solstice, Manwe at 1+ Aries squares the Cancer Sun while conjunct the Moon, Jupiter, and sparkling mermaid Salacia.
* another brief dip back into Pisces, from late October 2022 into January 2023, coordinates with the timing of Mars retrograde in Gemini. (Note that the Manwe discovery chart has Mars retrograde).
* Manwe lights up the Aries point again in late January 2023, for a 20-year transit in Aries.

Varda and Manwe live in a high tower at the top of the world. When together, he can see very far and she can hear very far. They unite in the sound and light of the original creative impulse. With orbits of 313 and 289 years, respectively, they move fairly closely in synch. They are now in a longterm square. I find this exciting and reassuring for this divine pair to engage in such a dynamic activation. Squares are a call to action.

The Discovery Charts — see above
I’ll make a few comments on standout features in the discovery charts of Manwe and Varda, so close in time that there are interesting repeated patterns. See what you can glean, taking into account that the times are unknown.

If your birthday is on the discovery date of any KBO,
clearly get to know that one!

* Varda has a conjunction of Mercury, the exoteric ruler, and Venus, the esoteric ruler, at 13+ Gemini, for unique harmonious perceptions. Do you have any planets in that degree? Speak to her.

* Manwe has a Jupiter/Sun (and Venus) conjunction on Regulus, Heart of the Lion, the Star of Leadership.

* Their shared Mars/Uranus conjunction is an eye-catching feature in Pisces for radical spiritual awakening, recently amplified by Jupiter.

* The placements of both of them stay in the same degree for both discovery charts, Manwe at 7 Pisces, conjunct the intriguing Mars/ Uranus conjunction! Manwe is retrograde in both charts and his discovery chart has Mars retrograde as well. Varda is at 2 Sagittarius, square Mars/ Uranus and retrograde in her own chart. She is very close to the South Node in the last degree of Scorpio, indicating her primordial origins, deep vision and alchemical capacity to recreate light from darkness. With Sun conjunct Saturn on Solstice eve, trine the Manwe/ Mars/ Uranus, she is seriously capable of extraordinary accomplishment.

* Manwe’s Moon is likely in Leo, whereas Varda’s is likely in Pisces, if discovered at night. (I’m not sure where I picked up that 3am time.)

*We see that these two are in their longterm square dynamic, which is continuing, but on the wane. By 2033/34 they are more than 5 degrees away from squaring. 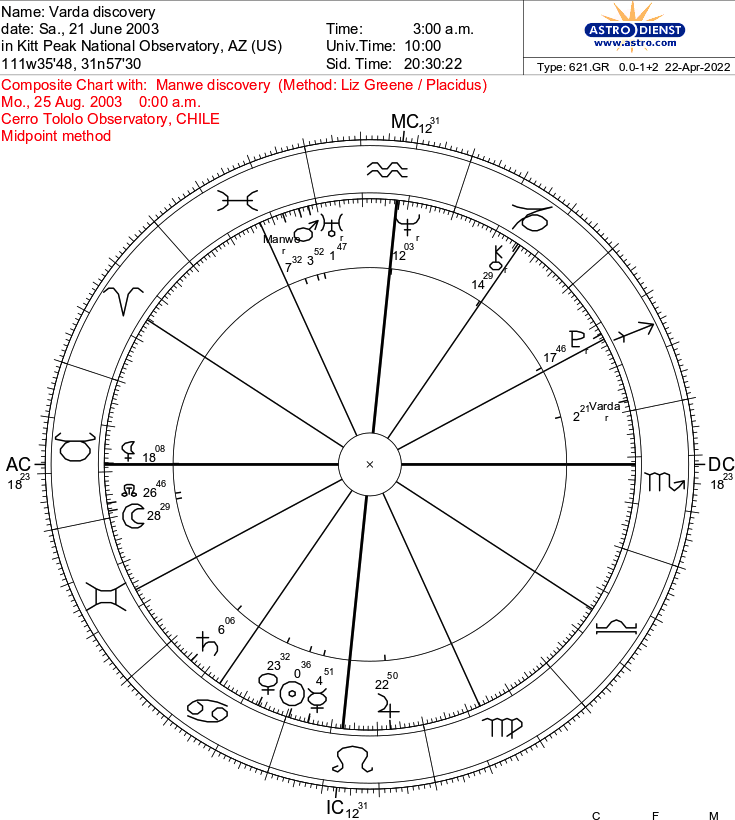 Because these two are “twin flames’ from the realm of divine light, it is worth considering their composite chart, as well. That Leo Sun makes perfect sense for these majestic co-rulers. We see that Uranus/ Mars/ Manwe conjunction in Pisces, of course, and Varda on the South Node. A current key activation is the nodal return that has recently occurred, in all three charts, centering around Eclipses—especially the partial lunar eclipse on November 19, 2021, and, more powerfully, on the total lunar eclipse of May 16, 2022. Manwe and Varda are called in to service.

These two KBOs clearly stimulate each other and, according to legend, together extending their individual capabilities. They are now beginning to open dual Equinox and Solstice gateways into whatever New Earth we can envision together at this amazing quantum time in our post-Middle Earth world.

Some initial suggested themes for these Tolkien-inspired KBOs, with their unique nuances to contribute to the awakening of quantum consciousness can include:

Use your intuition to identify more themes.
See what potentials you can perceive.
This is the essential way to activate these KBOs in your consciousness
and into manifestation.

This article was originally published by the Cosmic Intelligence Agency in their
TIMELORDS magazine, Issue 3, May 2022. Visit their website.