Varuna and the Dragon Who Drank the Sea 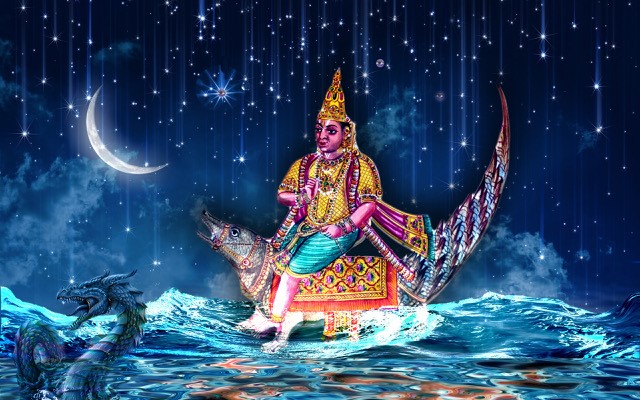 Pronounced “vah-roo-nah,” Kuiper Belt Object/TransNeptunian Object. Orbit = 283 years.
Discovered November 28, 2000 by SpaceWatch at Kitt Peak Observatory near Tucson, Arizona.
From NASA’s Small-Body Data Base “Varuna is one of the oldest of the Vedic deities, the maker and upholder of heaven and earth. As such he is king of gods and men and the universe, and he has unlimited knowledge. The name was suggested by M. Sarabhai”— likely in honor of Vikram Sarabhai, physicist and astronomer, known as ‘the father of the Indian Space Program.’

Thousands upon thousands of years ago in ancient India, so long ago we hardly can hardly remember, VARUNA was the most powerful of the great, great grandfather gods. He is maker and upholder of heaven and earth, king of gods and men, Lord of the Universe. With unlimited knowledge and intuitive sight, he knows everything there was, is and will be. He rules over the rivers, lakes, oceans and the underwater worlds with sea creatures great and small, from the tiniest baby turtle to the great white whale and the giant, deep sea squid. He knows all the mermaids and mermen by name. He sends the rains that fall from the celestial arch of the heavens.

“He knows the pathways of the wind.”

So it is written in the Rig Veda, an ancient holy book of India. The wind is Varuna’s breath, called prana, the life force. He gently blows the birds in their flight along the river of stars in the sky. Varuna is the God of Cosmic Harmony. He is in charge of making sure everything—each star and planet, every animal and human being, every flower fairy and tiniest drop of the sea—is in its right place at the right time, fulfilling its true purpose.

Vedic gods ride on various animals and birds. Varuna rides a makara, a kind of sea crocodile with a head that could change into an elephant or a deer when on land. Sometimes the scales on its hard tail turn into peacock feathers, fanning out with a thousand eyes. This way Varuna keeps his eye on everyone and sees that all was in order.  He also looks through the stars in the sky like windows to watch around the world as the Earth turns from day to night and circles the Sun through the seasons.

Varuna sees everything that goes on, and knows all our secret thoughts. He is in charge of making sure everyone is truthful and honorable, punishing selfish people who are not honest, who lie or cheat for their own gain. When he sees someone misuse the creative power of the Universe, he uses his snaky lasso to rope that outlaw around the neck and make him see the righteous way. Under Varuna’s law of Celestial Harmony, power is to be used for the good of all humans and creatures, so that the Earth continues to prosper and be a good place to live.  Varuna can be very strict and severe, frightening and wrathful toward people who break the law. He sends his makara to scare them. However, if they recognize they have done wrong and make up for it, he will forgive them. But those persons better not do it again— or else the makara will eat them for sure!

Varuna’s wife, Varuni, arises from beneath the sea carrying a vessel filled with Soma, the nectar of immortality. It is the sweetest, most wonderful drink in the world and gives great energy and vitality. Varuni is beauteous, with a scent like roses, sandalwood, jasmine and champa, the most fragrant scents in India. When you sit quietly and inhale her heavenly perfume, you feel her sweet love and ancient wisdom.

Varuna has a twin brother named Mitra, a friendly Sunshine god, bringing life-giving boons to humans. They have another brother who isn’t so nice—the powerful demon dragon, Vritra. The coils of his long tail wrap around mountains and his head touches the ceiling of the sky. Vritra likes to chew on the Moon and spit it out again, causing lunar eclipses. Dangerous when he gets hot, which is often, he roars and spits fire. This makes him so thirsty, he licks up raindrops as they fall and swallows the clouds as they drift across the sky carrying water. The Sun, too, feels hot. Rather than rage like Vritra, Sun dips into the ocean to cool off.

There once came a dreadful time when Vritra became very hungry and very angry, and started a fight with his brother, Mitra, the Sun. He tried to eat him, but Mitra dove into the sea to hide. Vritra became even more angry and started to drink up all of the waters—Varuna’s waters— causing a great drought throughout the world. He drank all the lakes, the rivers and then the whole ocean! He got very big and swollen. He could hardly move.

Varuna confronted him, but could not throw his lasso around the enlarged neck of Vritri— yet he knew just who to call on for help—Storm God, Indra.

“Hey, Indra! Come on over here. I need you!” Indra was one of the younger gods, Varuna’s great grandson. He carried lightning bolts and liked to throw them. “This is your chance to save the world, Indra. Drink up this goblet of Soma, and go blast that dastardly, thirsty dragon!”

“You bet I will, Varuna-Ji!” Indra did, coming in to save the day, riding the great white elephant, Airavata. So it is written:

“When his wrath thundered, when he rent Vritra to pieces, limb by limb,
He sent the waters to the sea.”

All the waters came like a waterfall from the dragon’s body, greening the Earth. The ocean settled back into its large bowl. Varuna was proud of Indra. “You did good, Indra. Now, I want you take over for a while and be King of the Gods. I am going on sabbatical. When you need me, I’ll come back.”

Indra took over many of Varuna’s jobs, ruling over the waters of the sky, the rain and the storms. Varuna disappeared and was mostly forgotten. Now the world has fallen into trouble, with earthquakes, tsunamis and superstorms, rising temperatures and melting ice. Greedy people, like the greedy dragon, Vritra, are hungry and angry and threatening all life on Earth.

Varuna has come back, as a newly discovered planetoid, to restore Cosmic Order out of the chaos on Earth. He will vanquish the demon Vritra, who is again causing droughts and imbalances in our world, and severely punish all the selfish liars and criminals who break the Law. He joins many other gods and goddesses from around the world, now reawakening in our distant solar system to wake us up into a New Era of Divine Light, Peace, Truth and Justice. 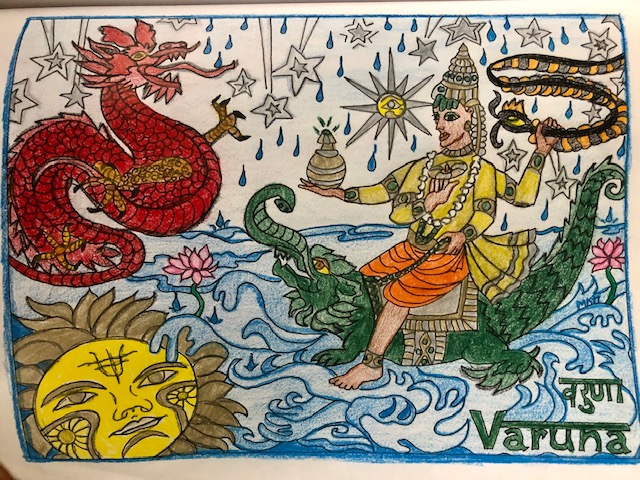 Another, fuller version of Varuna’s story is told by Vic DiCara in relation to the Vedic Moon Mansion, Shatabhisha. Entertaining and insightful, whether or not you know much about the Nakshatras or Moon Mansions.