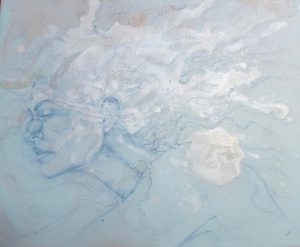 Chariklo loved to flow in the waters along the banks of the river. The leafy branches waved to her in the breeze as she swam by, with a graceful swish of her mermaid tail, dancing in and out of the river valleys toward yonder hills and higher cliffs. Along the way she turned aside to explore random smaller streams and brooks and rivulets that wandered through the woods and meadows, gurgling over multicolored pebbles. There the waters became dark, flickering, mysterious, lined with tall grasses and wild flowers, bright in sunlight or dusky in shade.

Watching the reflections of the rocky crags in the still water pools, she would stir them to make small whirlpools, a carnival ride for the small fish. Where the winds bent the grasses she found secreted bird nestings. She rested in favorite pools, stretching out on warm stone slabs idly dipping her tail in the relaxing coolness or playing with visiting dragonflies and water spiders. Sky and clouds drifted by above and below, shaping pictures she would read like you read this book.

She could also read the ripples in the water and underlying patterns highlighted by sunlight, moonlight and starlight. The reflected sky was like a great shimmering flower from which everything came into being.  She herself was crowned by a delicate band of light. On certain nights, soon after twilight when the crescent Moon embraced the brilliant Evening Star, her halo shimmered with star song.

In the warmth of summer, among grasses tall and green, she dressed her hair with water lilies. She arranged flower petals, small leaves and river stones into mandalas on the rocks.  But she especially loved the crisp scent of autumn leaves in the invigorating wind, stirring her heart. Such a busy time, as seen in reflections of various creatures making their way along the pathways on the spine of the hills. One day, she saw a most noble creature galloping across the hill above her hidden grotto. She had never seen this being before. He moved like a horse, yet had the torso of a human, so she thought. She rarely saw people, but heard about them. Yes, this one looked like a man-horse—a centaur! Rumor told that they lived in caves higher up among the mountains.

Ah, he was glorious, his rugged face catching the Sun and his long dark hair streaming in the wind. He carried a small, laughing human on his back. They stopped just above where she was. She turned her head to look up. The centaur carried a crystal-topped staff, which he used to point into the distance at something across the great valley, turning his head to talk to the boy. Chariklo was spellbound watching them.

Suddenly he looked down and directly into her eyes. Rarely noticed, she was startled to be so clearly perceived. With a quick flick of her tail, she disappeared into the water, merging with the current, and swam away. She could feel his eyes follow her. She thought about him that night when she listened to the song of the stars.

Another day, not long after, she was laughing cheerily as she swam along with a school of small silverbacks. She had melted into the water, with a translucence lightly suggestive of her fluid nymph shape. She loved feeling at one with the flow of lively waters, bubbling around rocks and rushing with the small waterfalls, dancing in the sparkling sunlight on the moving stream. As she and her silvery friends rounded a bend, the waterway moved into a forest— just in time to see the Centaur step out from a stand of trees edging the riverbank. There were many centaurs in the territory, but this was the notable, noble son of Saturn.

Hearing her song among the merry sounds of the water, his eyes found her again, even in minimal form shimmering in watery sunlight. He matched her pace along the river’s edge. She rushed along in a surge of water, yet he followed, with a fast trotting step or a slow gallop. They played like this until the sun went down. For many days afterward he kept her company along the waterways. This way they came to know each other, enjoying their unusual companionship. He could sense her presence no matter what shape she took, even as one of the silver fish, or a lily pad. Though such different beings, in their hearts they shared a deep love of Nature, its small delights as well as the ancient wisdom of the Earth, the rhythms of the waters and the seasons, the stories in the rocks and the stars.

His name was Chiron, this wise being, often accompanied by one or more of his troupe of young students. With patience and humor, he showed them seasonal details about the nuanced life of nature. By night he entertained with stories of the stars overhead, pointing out their patterns and periodic planets passing across the heavens. He took care to help each one bring forth particular skills needed to fulfill their quest in life. While splashing in water pools and sunning dry on flat rocks, they listened to the music of waters and Chariklo’s water songs, learned from the bubbling brooks and broad streams. She translated wordless visions into designs of flower petals and leaves and showed them how to see visions in the still reflecting pools.

The love and companionship of Chariklo and Chiron grew. Yet she lived in the waters and he in the hills. They were made of different elements—she of water and air, he of earth and fire. She felt a growing desire to be with Chiron, a yearning that came from deep within her heart. She sought solace in the deeper waters and the darker shadows where the water lilies rooted in the mud, heart heavy with loving and longing to join Chiron in his life of teaching and healing. She could imagine him so clearly in her heart and her mind’s eye—his noble form, rippling and glistening skin and hide, his wild wind-blown tail, his wise twinkling eyes. The longing and love became so strong that she found herself reaching beyond what she had ever known and been. Her nymph body started to transform, shaping and reshaping as it turned into a horse’s torso. Her mermaid torso and tail changed texture, separated and stretched out into four legs. She found herself stepping out of the water onto the soft mosses of the riverbank. She had become a centaur woman.

She joined Chiron in his life and knew that she had found another wisdom, the wisdom of love, finding in her heart’s desire how to reshape herself into whatever best served true love. For this act of love, she was crowned with a second halo from the star angels. Chariklo remained a centaur for many a year and a day longer, giving birth to three daughters and one son who would follow their own mythic destinies. While caring for the children, for Chiron and his troop of young heroes, she was teaching them her special knowledge. Some days, they would all spend time at the riverside, splashing their feet in pools, jumping across rocks and celebrating life in a sing-along with various water voices. At these times, Chariklo sometimes missed flowing along as part of the river, though she had come to love the woods and meadows, the seasons of wild flowers that sweep in swift succession through the fields and valleys in waves of color and scent, with healing gifts, secrets and potencies.

Amidst their educating and adventuring they sometimes met with other gods, humans or nature spirits, bringing messages or asking advice. There were also other centaurs in the territory, a rather wild, rough and ready bunch, born from a shadowy lineage unrelated to Chiron. On one special occasion, Chiron and Chariklo and their family attended a royal wedding party.  The seal was broken on a bottle of sacred wine, spilling out this potent liquor before its proper time. Drawn by the scent, a troupe of wild centaurs roared in like a motorcycle gang, crashing the party. Tempers and fights broke out in the drunken fray. Arrows were strung on bows and let loose. Inevitably, tragedy struck. Some say it was an arrow of his student Herakles, dipped in the poisonous blood of the serpent Hydra that accidentally hit Chiron in a shock of pain.

Though a master healer of others, he could not heal himself. When any other centaur or human would have died, Chiron as son of Saturn, was part god and thus immortal. His life became a painful burden. In her deep love and compassion, Chariklo tended to him. After nine hundred years, or so it is said, Zeus gave permission for Chiron to give up his life and be lifted into the sky. Chariklo helped Chiron to shapeshift into his star body to find his place among the constellations. We still see The Centaur low in the night sky, jumping over the Southern Cross.

Sorrowful, Chariklo retired back into the waters, once again clothed in her mermaid body. She swam the long rivers way down to the sea and made her home among coral reefs surrounding distant islands. By night she would gaze upon Chiron’s stellar form, by day she showed sea stars how to arrange themselves on the sandy sea floor to reflect constellations in the heavens.

Art by William Giese
Drawing by Kelley Hunter, coloring by Anne Jameson
Note: This story does not strictly follow classic Greek sources, which portray Chariklo as a nymph, follower of Athena or daughter of Apollo. 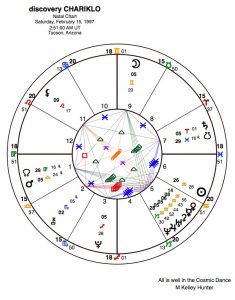 Astronomical Chariklo was discovered on February 15, 1997. Its 62-year orbit around the sun swings in an ellipse between Saturn and Uranus. Chariklo is the largest of the very small Centaur Objects, a new tribe in the solar system. Her discovery chart is extraordinary, with the Sun and five planets in Aquarius and beautiful 6-pointed star. In 2013 astronomers were surprised to find two slender rings circling this tiny object, like a double halo or wedding/engagement rings.