This New Moon in exuberant Leo is in exact conjunction with Varuna, one of the newly discovered Kuiper Belt Objects, named for an ancient Vedic God that oversees and maintains Cosmic Law. A Venus/Black Moon Lilith conjunction in Cancer adds complex layers of feeling that seek and protect the valuable pearl in our hearts. Excitement or anxiety? It’s your choice when activated Mars and electric, earthquaky Uranus join the North Node in Taurus for a date with Destiny. This rare triple conjunction at 18 Taurus rumbles through the Earth in volatile, high-charged activity that changes the world. 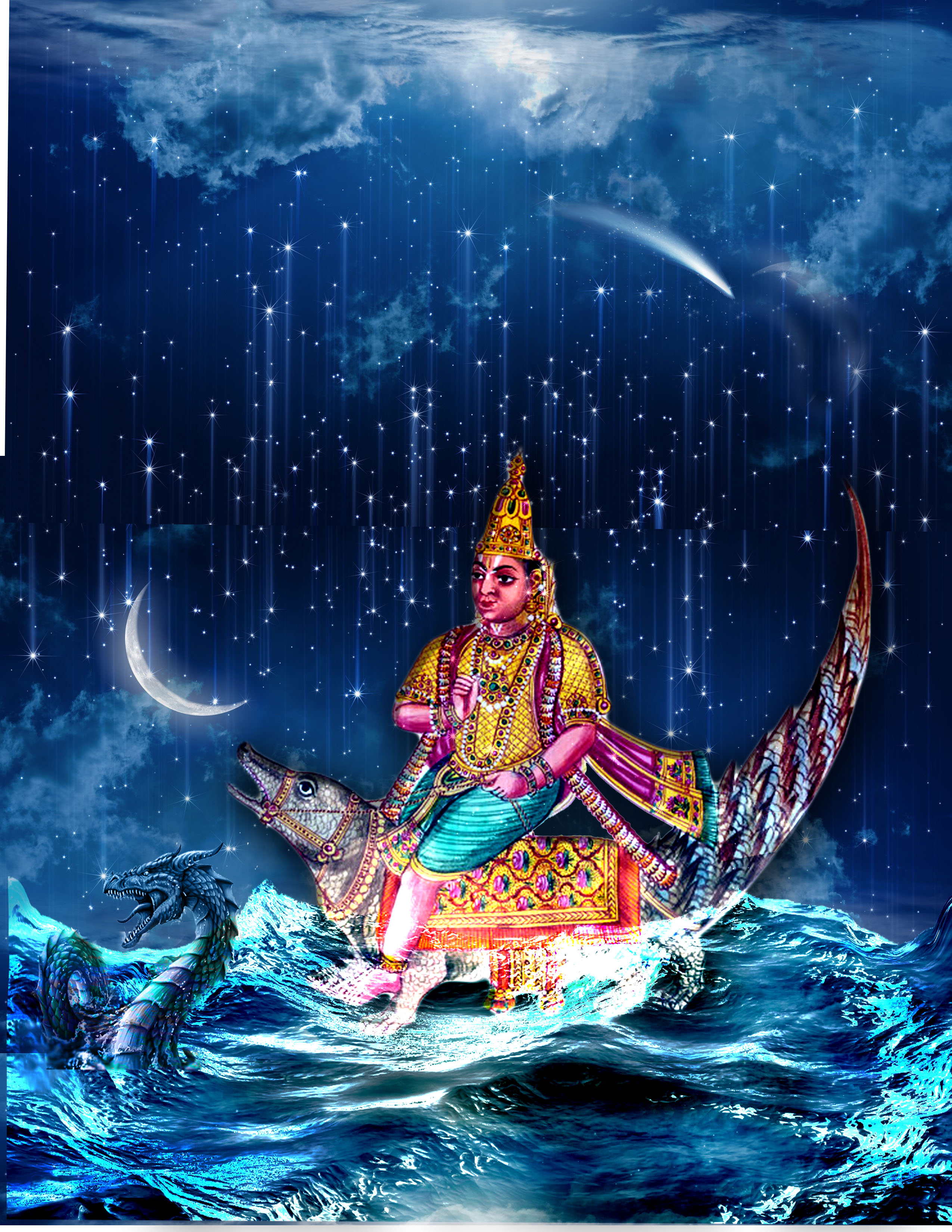 Varuna, astronomical object #20000, was discovered in the year 2000 (attention numerologists!. With a 283-year orbit, it was named for a Vedic god of India in honor of Dr. Vikram A. Sarabhai, 1919-1971, respected pioneer of Space Science & technology in India.

According to NASA’s Jet Propulsion Laboratory Small Body Data Base [where you can look up information an any small solar system object, including moons, asteroids, KBOs, etc. https://ssd.jpl.nasa.gov/tools/sbdb_lookup.html#/], Varuna is

“the maker and upholder of heaven and earth. As such he is king of gods and men and the universe, and he has unlimited knowledge.”

Named after an ancient Hindu God, Varuna, rules the waters of the sky and the oceans. In other tales he catches liars as the stars act as a thousand eyes watching over all actions of humankind. Perhaps the lies of those who seek power for its own sake may be brought to light.

“Thousands upon thousands of years ago in ancient India, so long ago we hardly can hardly remember, VARUNA was the most powerful of the great, great grandfather gods. He is maker and upholder of heaven and earth, king of gods and men, Lord of the Universe. With unlimited knowledge and intuitive sight, he knows everything there was, is and will be. He rules over the rivers, lakes, oceans and the underwater worlds with sea creatures great and small, from the tiniest baby turtle to the great white whale and the giant, deep sea squid. He knows all the mermaids and mermen by name. He sends the rains that fall from the celestial arch of the heavens.

“He knows the pathways of the wind.“

“So it is written in the Rig Veda, an ancient holy book of India. The wind is Varuna’s breath, called prana, the life force. He gently blows the birds in their flight along the river of stars in the sky. Varuna is the God of Cosmic Harmony. He is in charge of making sure everything—each star and planet, every animal and human being, every flower fairy and tiniest drop of the sea—is in its right place at the right time, fulfilling its true purpose.”
—from my article, Varuna and the Dragon Who Drank the Sea

What is your true purpose? This New Moon cycle may help you discover a new level to that question. See what you can glean from any glimpses of Varuna in your experience. As we head further into our “New Earth,” the cosmic energies are intensifying, raising the light frequencies for us to integrate and radiate. In order for that to happen, we need to open our hearts, according to Leo, the Lion, who has Regulus, a supergiant, “royal” star at its heart. Leo is a highly creative sign; the quantum KBOs ramp up that creativity with a new quality of consciousness. The source of creativity Varuna-style, may have to do with our personal and collective alignment with Divine Law and Order.

[Another recommended resource for learning about Varuna is this youtube by Vedic Astrologer Vic DiCara. He tells more stories and gives a fuller picture from his research and astrological experience.]

A Dandelion Download
I just recorded a short, interesting video with quantum plant researcher and shaman Davyd Farrell about this Leo New Moon/ Full Moon cycle as part of his current immersion series on Dandelion as a quantum plant teacher for our times.

You may remember that I mentioned Dandelion in several newsletters a few months back, including the ‘Dandelion New Moon’ in Gemini on May 30 of this year. In the last ‘Super Pluto Full Moon’ newsletter, I mentioned a ‘Suggested Strategy from Dandelion’ to get through these times, using insights from Davyd about Dandelion as:
“Master of the Present moment…the synchronicity of how things flow.”

My response was: “Sounds rather Chironic to me, with its ‘Be-Here-Now’ holistic alignment of the spiritual-mental-emotional-physical dimensions of our experience.”  This Dandelion/Chiron connection was mentioned in our new video, quite a fast-paced discussion from several perspectives including the French ‘Dent de Lion’— Lion’s tooth, referring to the shape of it leaves. Thus we got into Leo and this New Moon. If you are interested, the 30-minute video is now posted on the home page of his website.

An astute friend who knows Lilith well reminded me this week that Black Moon requires a level of profound surrender, which we are often reluctant to give. The ego does not want to let go. Lilith can get quite explicit in her call to embrace the soul’s deep desire to embody its true essence and divine nature.

The square to Chiron brings this into a kind of healing crisis, an invitation in each holy Moment to listen to the ‘still small voice’ from our inner sanctum to follow the path of highest resonance, inviting in a high Venusian frequency of beauty, joy, love, prosperity— indeed, to “Live Long and Prosper,” as Spock would say.

The pace these days is not exactly slowing down! A level of expectation, a combination of excitement and anxiety, is in the air. Do you feel it? There is an astrological explanation, which I will share in a moment. It’s a good practice to keep on with the Dandelion strategy of inhabiting the Present Moment more fully. Thus will we engage the energies more deeply and smoothly, gracefully and kindly, as if time is stretching out. Also, breathing into your heart calms the mental stress. The feminine Cancer qualities invite us to take good care of ourselves. We are each very precious, and have much to give— only possible when we are well and radiant, shining like the Leo Sun.

Sabian Symbol for 6 Leo:
“An Old Fashioned ‘Conservative’ Woman is Confronted by an Up-to-Date Girl”
We don’t need to look far into our global and U.S. national situations to make some connections here. It is important to note that the word ‘conservative’ is in quotation marks, in a question as to the meaning of that word (often politically-charged) in this current context.  Astrologically this sounds to me like a values clarification encounter, a Venus issue. Contemplating this image has led me to think about in what ways I am ‘old-fashioned, conservative’— I like wearing my Mother’s pearls, for example, and I prefer telephone to texting— and in what ways I feel ‘up-to-date’— for sure I cherish my independence and freedom to make choices.

Perhaps we need to consult Varuna on this matter, as the KBO is inhabiting this degree on and off from late 2020 through half of 2023. Let’s see if we can take what might appear to be a clash of values and find our own creative melding of the best of both worlds as we collectively design our new world in relation to Earth herself.

Rare Triple Conjunction at 18+ Taurus
Mars, Uranus and the North Node of Destiny close in together for peak potency on July 31-August 1. This New Moon opens the door as they move into alignment, this potent whopper-zapper trio, under the warm, Sun-powered creative power of Leo.

In earthy Taurus, it will be obvious, on-and-in-the-ground action. It has an earthquake potential both literally and figuratively, as well as a potential world-changing shift in the global financial system. Taurus rules money and resources. Venus rules Taurus and is currently in an ego-busting, mind-blowing meet-up with Black Moon Lilith and squaring Chiron, as we discussed above. These factors intersect for quite some unexpected, shocking, surprising developments. Again, let’s keep Varuna in mind, with all that this particular creator god potentiates. Shall we keep our eye on India?

Let’s also consult the Sabian Symbol for 19 Taurus for a hint of potential outcomes, taking into consideration that these may not completely play out until Uranus finishes its imminent retrograde circle August 24, 2022– April/May 2023.

Keeping that in mind, let’s look at both
18 Taurus—“A Woman Airing an Old Bag Through a Sunny Window to Give It Air & Sunshine”
I had to share this as a potential response to the feminine confrontation of the 6 degree Leo New Moon. Yes, we need to air things out this Sunny Leo window of the New Moon cycle. The next New Moon is in Virgo on August 27. See you there to see what has been aired out!
and
19 Taurus— “A New Continent Is Rising Out of the Ocean”
An interesting image for an outcome! Will Atlantis finally rise? Or is this a completely new continent? Is this referring to New Earth that we are co-creating with our planet and ‘all our relations’? With the presence of Uranus so strong, holding at this degree from July 7 – October 11, whatever this ‘new continent’ is will likely be quite a surprise. With Uranus, it is wise to expect the unexpected. Bring it on!

It will most likely be in Divine Order, as decreed by the presence of Varuna and his all-seeing eye. These KBO creator deities represent a refreshing awakening of archetypal energies that have, perhaps, been dormant, forgotten, or unknown by many. These living energies appear now to be reengaged, remembered, and enlivened back into our lives by our attention. We need them now to awaken us to the realm of potential and possibility along with new dimensions of consciousness and experience.

This could be quite fun and exhilarating,
like a roller coaster ride in an ever-changing,
kaleidoscopic ‘reality’ of mosaics and fractals.
Life is such at this amazing moment!

With love rather than fear lighting the way,
what is next for you in this New Moon cycle
with this triple conjunction on deck and
Lilith whispering in your heart?